Detailed explanation of the largest DEX Osmosis in the Cosmos ecosystem

Osmosis is currently the platform with the largest transaction volume of IBC in the Cosmos ecosystem, and validators maintain network security by staking LP tokens instead of OSMO.

Osmosis is a DEX with an independent and interoperable Layer1 public chain built on the Cosmos ecosystem;

It is the first application chain to achieve huge IBC transaction scale and launch DEX activities in the Cosmos ecosystem;

The protocol is powered by the native token OSMO, which can be used for staking and governance. OSMO rewards are also released through liquidity incentives.

Investors believe that multi-chain can solve the expansion problem of blockchain, which has aroused interest in the Cosmos Network ecosystem. Cosmos, as the "Internet of Blockchains", can accommodate a series of independent application chains. Each Lisk in the network is a unique Layer1 blockchain designed to increase the functionality of the Cosmos Network.

To connect such a blockchain ecosystem, a healthy trading platform is required. Through these trading platforms, capital allocators have access to liquidity to nurture healthy markets, invest in growing projects, and direct investments toward promising opportunities.

The Cosmos network supports its own native DEX, but leading the way in terms of liquidity, volume, and fees is the Osmosis protocol. In this report, we will learn about Osmosis and how it compares to other DEXs that adopt the AMM model.

Osmosis is a DEX that supports Inter-Chain Communication (IBC) in the Cosmos ecosystem. It was founded in January 2021 by Sunny Aggarwal, Josh Lee and Dev Ojha, and is developed by parent company Osmosis Labs.

The three co-founders each draw on their experience working in the blockchain space, and all three initially developed Tendermint, known for its Byzantine fault-tolerant consensus mechanism.

During that time, they worked on the underlying architecture of the Cosmos ecosystem, each working on various projects including the Keplr wallet. It was also during this time that they founded Osmosis with the aim of building a fully customizable DEX.

On a functional level, Osmosis operates similarly to other AMMs. Liquidity pools lock tokens into smart contracts, which are automatically executed in token trades.

A trader's counterparty comes in the form of a liquidity provider (LP), who provides the underlying token, or liquidity, to these pools. In return, these LPs receive designated LP tokens, representing their contribution to the pool and a measure of their share of yields. These are traditional things.

Additionally, like many other AMMs, Osmosis relies on a deterministic pricing model to ensure that the respective weights of tokens in each pool remain consistent. In fact, almost all AMMs use deterministic pricing because it helps determine the number of tokens in each transaction. While the market pricing of any token may change, opportunities for arbitrageurs are minimized when the underlying pricing formula is maintained.

Long-term DeFi users may see the former as a traditional liquidity incentive. The mechanism for binding liquidity indicators is simple: LPs who add liquidity to the pool will be rewarded with the native token OSMO.

LPs can choose when they are willing to bind their tokens. The exact amount of OSMO rewards earned depends on the length of the bond time and the number of bonded tokens, which are all determined by protocol governance.

Fortunately, OSMO tokens are not the only reward for mining pools without internal incentives. External incentive providers, such as users transacting in the pool, can distribute their rewards themselves. As with internal liquidity incentives, external providers choose which variables to set, such as the time it takes to qualify for a reward or the amount of the reward.

If binding liquidity metrics is the “carrot” of long-term liquidity, then exit fees are the “stick”. When LPs withdraw funds from the liquidity pool, the protocol charges a small fee in the form of LP tokens.

This exit fee is determined by the pool creator and is intended to benefit the remaining contributors to the pool as the exit fee is burned. In general, when LPs decide to withdraw their liquidity, they get back their initial funds plus accrued transaction fees minus exit fees and impermanent losses.

Notably, Osmosis is the first DEX in the Cosmos ecosystem to support IBC. While other DEXs now exist, such as Gravity DEX and Injective Protocol, Osmosis is the first Cosmos-based Lisk to achieve massive IBC transaction scale. Due to its first-mover advantage, Osmosis continues to be No. 1 in IBC deal size and No. 2 in total deal size, behind Terra. 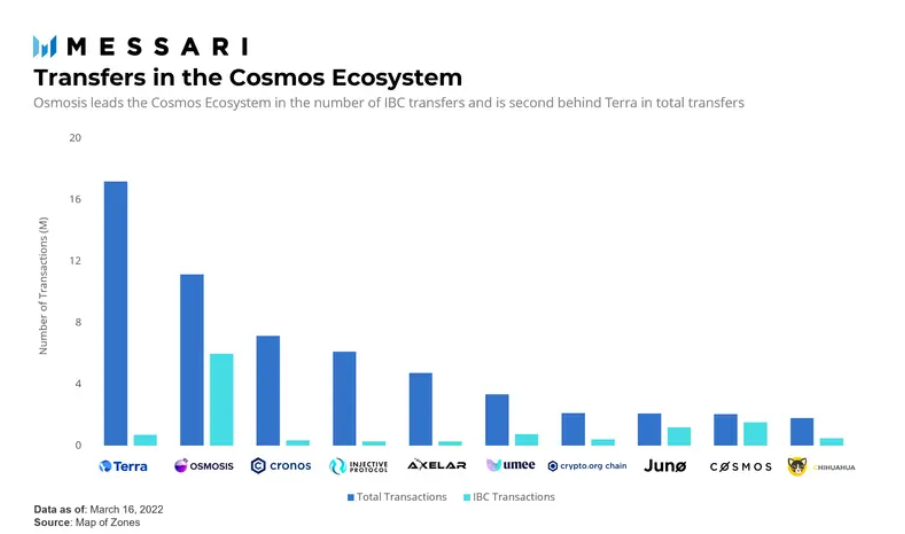 The growing interest in the Cosmos ecosystem has put Osmosis in the spotlight as well. Since its launch, both the total trading volume and total lock-up volume have been on an upward trend. In fact, both metrics have hit new all-time highs over the past 30 days. Given the past rumors that interacting with Osmosis or holding OSMO tokens can earn empty investment tokens for projects in the Cosmos ecosystem, the trend shows no immediate signs of slowing down. 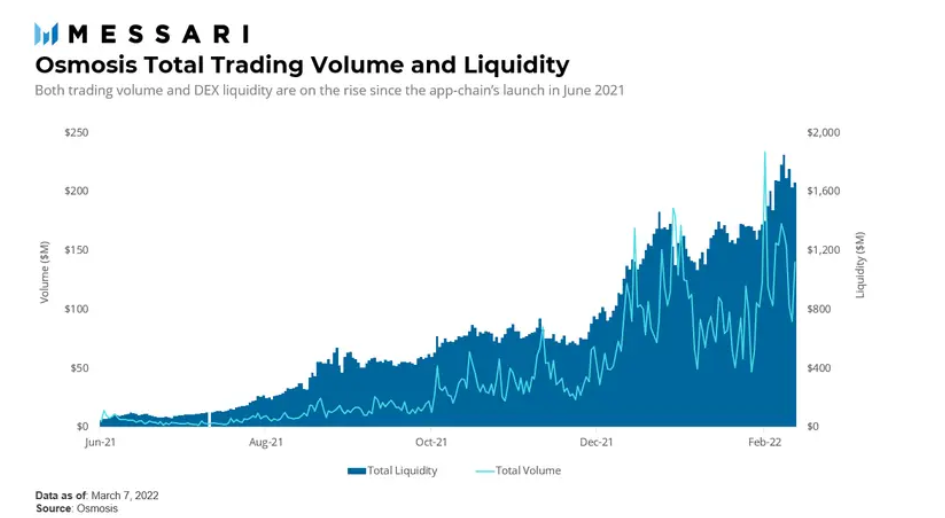 Much of the inspiration behind Osmosis came from Ethereum-based DEX Balancers and their ability to provide multi-asset liquidity pools. In the eyes of the Osmosis Labs team, mixing assets into liquidity pools is the first of many customizable options. With this level of customization, the role of DEX has evolved from only trading spot price assets to being able to support options markets, inter-chain pledges, etc.

Pool parameters, including transaction costs, initial token weights, and time-weighted average price calculations, are set by the original creator of the pool. However, all Osmosis liquidity pools are autonomous by LP token holders.

Voting rights are distributed based on weighted ownership of funds in the pool, and longer lock-up periods increase voting rights. Since Osmosis expects the market to determine optimal capital efficiency, autonomous pools are only one of the determining factors in building the most competitive liquidity pools, and the final game will be one that provides greater participation for capital allocators, competition intense market.

Osmosis devised a clever solution to this problem: Superfluid staking, considered one of the biggest advancements in PoS since liquid staking, a staking method that allows LPs to provide liquidity using their native OSMO token while using the same token Coins bring security to the underlying network. Below is a visual representation of the Osmosis Superfluid staking platform. 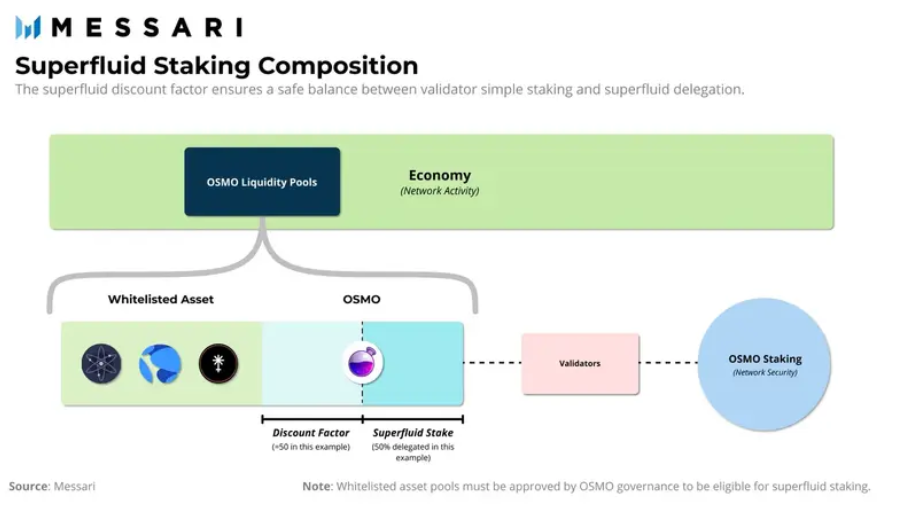 Whitelisted liquidity pools are the only liquidity pools eligible to participate in Superfluid staking. This is because Osmosis wants to limit malicious actors from minting risky assets who can then drain the collateral liquidity pool of the underlying OSMO token. Preventing this from happening is critical to strong security, and determining whether a whitelisted pool is eligible will be determined by Osmosis governance.

The benefits of Superfluid staking should be obvious: it allows LPs to double their returns by securing the network through revenue generated from transaction fees and rewards earned through staking.

At the same time, the underlying network benefits from additional security, creating a win-win situation for all parties. What’s more exciting is that Osmosis is not necessarily the only beneficiary, the protocol could provide staking as a service to help other Lisks gain security. The end result is that this Superfluid staking feature enables secure interweaving of the network into a large cross-chain network.

In early March, Osmosis announced that it had successfully partnered with blockchain development tool company Confio to integrate the CosmWasm cross-chain smart contract engine into the Osmosis protocol. With this partnership, Osmosis has an untapped pool of resources, as CosmWasm has one of the largest developer ecosystems outside of Ethereum and Solana.

CosmWasm provides a WebAssembly Virtual Machine (WASM) for developers familiar with Go and Rust. A toolset enables developers to build new permissioned smart contracts that can run across multiple Cosmos SDK blockchains. We can think of it as a framework designed to enhance the functionality of smart contracts for interoperability between various Cosmos application chains.

Additionally, the partnership may hint at other features that Osmosis may support in the future, such as yield aggregators, liquidity management tools, and more. While this is exciting news for those looking to maximize returns, the Osmosis Labs team has made it clear that its ultimate goal is to maintain an interoperable DEX-centric protocol.

Osmosis’s upcoming roadmap includes addressing Maximum Extractable Value (MEV), one of the biggest challenges in decentralized exchanges. Since all transactions go through the blockchain, which means they are available on a public ledger, miners are able to rearrange the order of transactions within their blocks for profit.

Miners will have an advantage over regular users in situations where first-approved transactions are important, such as front-running or acquiring precious NFTs. This type of MEV behavior is bad for DEX users, but good for users such as miners who decide transactions within blocks.

MEV started out as a privacy issue and later morphed into an economic one. According to data from MEV Explore, miners have withdrawn more than $600 million since January 2020 on Ethereum alone.

Osmosis' solution to MEV is to implement a form of encryption called threshold encryption. 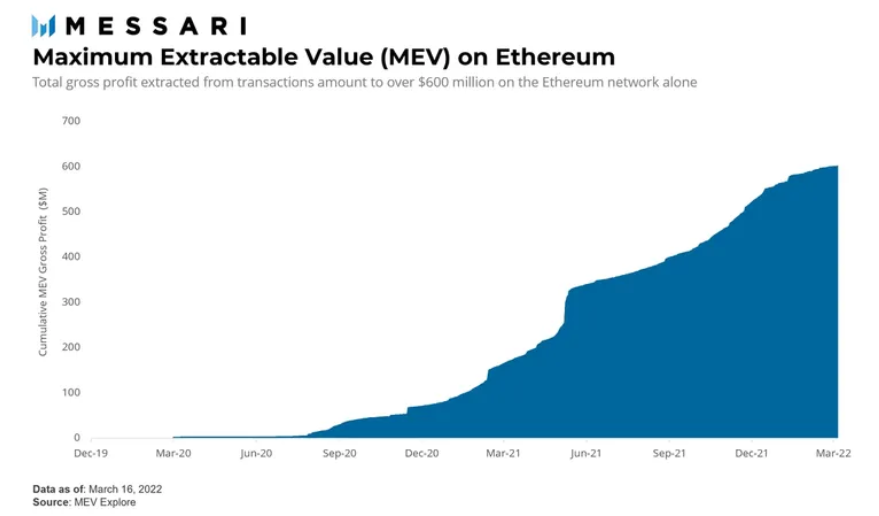 As a native governance token, OSMO supports all functions of the Osmosis Lisk. A supply of up to 100 million tokens will be set in daily epoch-based issuance. The release schedule is similar to Bitcoin’s famous “halving,” where Osmosis reduces the number of new tokens by a third each year. New tokens will be issued through staking rewards, developer attribution, community pool allocation, and liquidity mining incentives. The complete supply curve table is shown below:

The release of OSMO tokens is a fair release, distributed among airdrop recipients and the protocol’s strategic reserves. Notably, 50% of the supply is airdropped to ATOM holders, and the remaining 50% is reserved as a strategic reserve, which will support the continued development of the protocol. Reserve tokens can be used to fund open source projects, make investments, or provide grants. 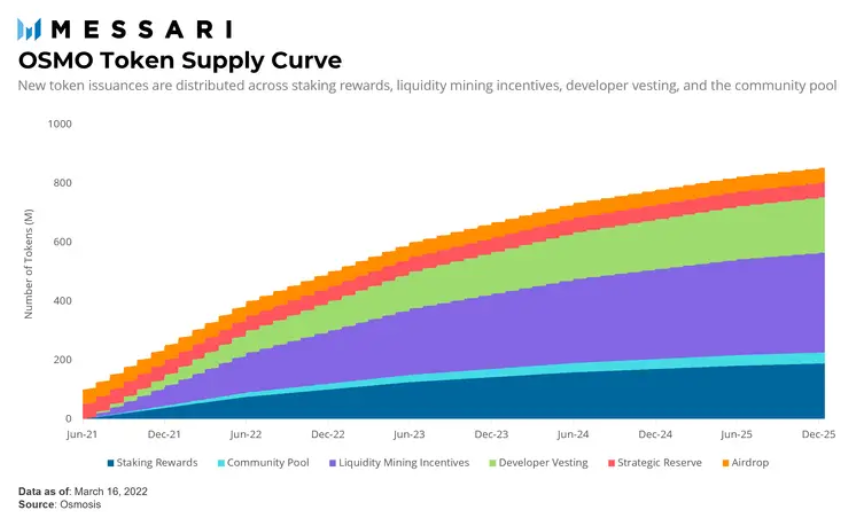 DEX trading volume is very competitive, but at the end of the day, successful applications must continue to innovate to continuously attract liquidity providers. The Osmosis community believes that with its status as a multi-chain core, flexibility to set liquidity pool parameters, innovations in staking models, and an exciting anti-MEV roadmap, Osmosis is well-positioned to gain massive liquidity Sex and agreement income. Only time will tell how successful it will be - but early indicators look promising.

TAGSOsmosis
Be the first to invest in most profitable projects