Terra provides a decentralized algorithmic stablecoin. To ensure the long-term viability of its Token, Terra has built an entire ecosystem around stablecoins. The ecosystem currently includes a payment app (Chai), a savings protocol (Anchor), a synthetic stock market (Mirror), and more. In addition, Terra plans to launch an insurance agreement (Ozone) soon. Each application uses Terra's stablecoin to increase its demand. This is important - we'll cover them separately below.

I will detail the tokenomics of Terra, Mirror and Anchor and show that they are quite complex.

For a more basic introduction to token economics, see my article on Bitcoin and Ethereum on BanklessDAO. Terra has recently updated Columbus-5 and this article reflects the current Columbus-5 version of the network. 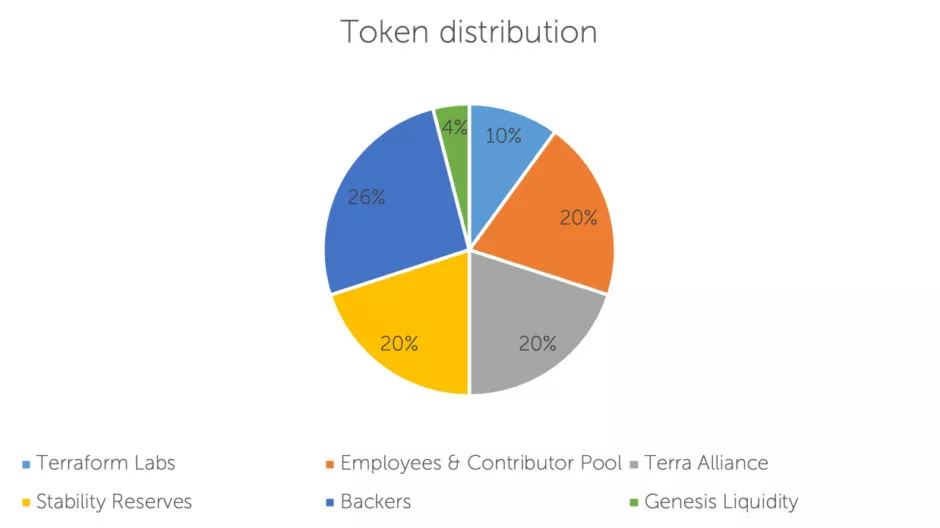 Terra (UST) stands for stablecoin. Luna represents the reserve or governance token, used to keep Terra pegged to it. Stablecoins are not only used in the Terra ecosystem, but also to build cross-chain bridges for use in other ecosystems, such as Solana.

The token economics of built-in stablecoins are a bit more complicated than Bitcoin and Ethereum, and the details below help explain how it works.

The genesis supply of Luna is 1 billion Tokens, which are split as follows: 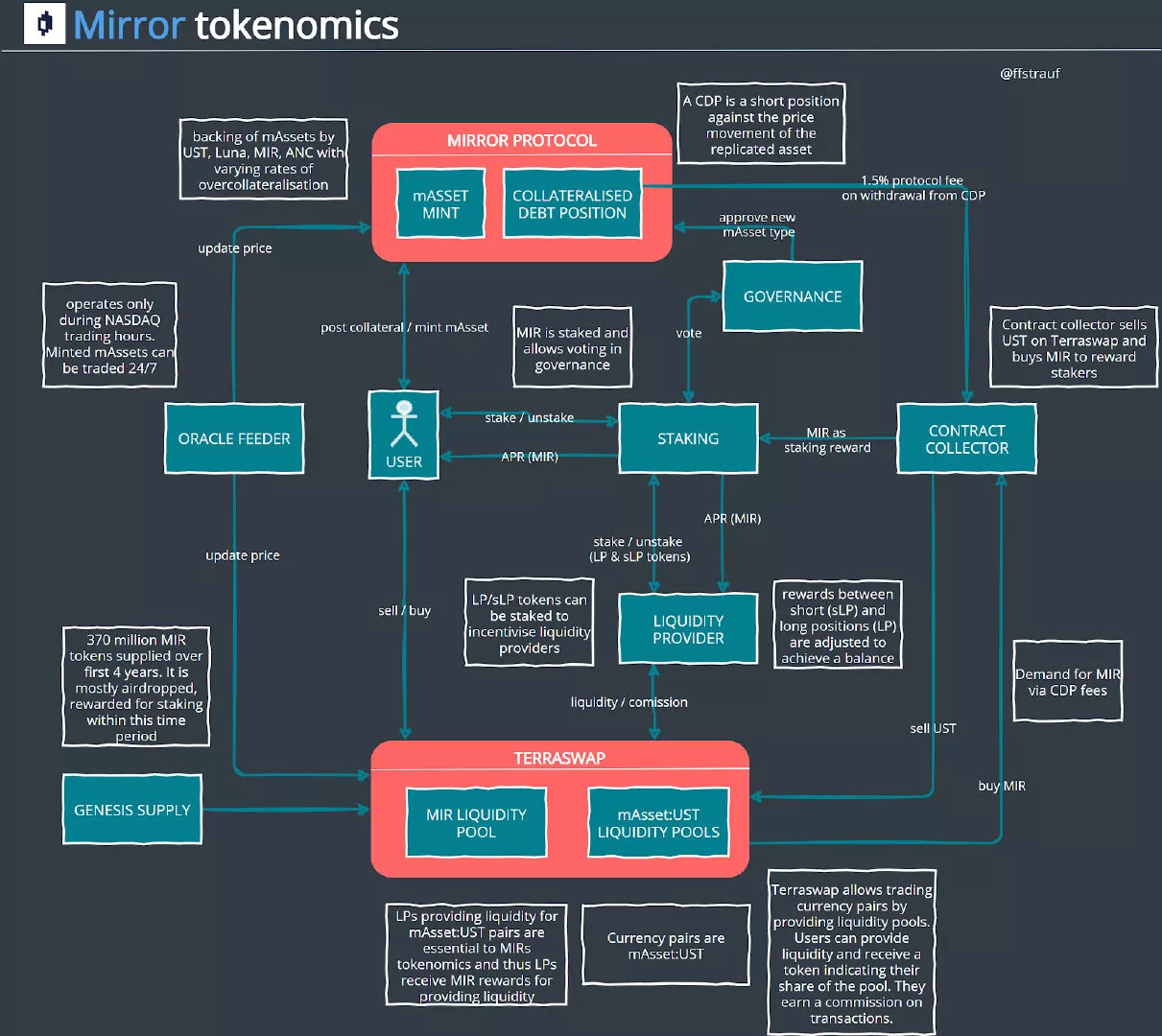 The Stability Reserve is used to manage the early stability of the network and to intervene when needed by injecting Luna. If demand increases rapidly, the Terra team can burn Luna from the reserve to supply more Terra (more on that later).

Terra can be pegged to many different fiat currencies. TerraUSD (UST) pegged to the U.S. dollar has the largest market cap and trading volume. TerraKRW (KRT) pegged to the Korean won is used for the Chai payment app. For the purposes of this analysis, we will focus on UST to explain its mechanics, but the pegged currency is interchangeable with any other Terra stablecoin.

Protocol market makers provide arbitrage opportunities by minting Terra whenever demand for UST is high. This demand will cause the price of UST to rise in the market and it will lose its peg to the US dollar. At this point arbitrageurs can trade Luna for Terra at a 1:1 ratio, allowing them to sell newly minted UST at a profit above the peg market price. Luna, on the other hand, was burned.

This continues until there is enough supply to bring UST back to its peg point.

In contrast to the expansion just described, the contraction works in the opposite way, allowing arbitrageurs to buy cheap UST in the market and exchange it for Luna at a 1:1 price. UST was burned in the process. This reduces the supply of UST until the hook is back in place.

A contraction can introduce a lot of LUNA and cause its price to drop. The Terra Protocol aims to grow through economical, real-world usage. Holders who believe in this will have to live with short-term volatility in order to achieve long-term growth of the ecosystem, adoption of UST, and the increasing scarcity and value of Luna.

Since the Columbus-5 version went live, 100% of the seigniorage has now been burned.

Validators participate in determining the exchange rate for the fiat currency that Terra is pegged to. Accurate votes are rewarded, and inaccurate votes are penalized. Since Columbus-5, rewards come from swap fees between different Terra currencies (eg UST to KWT).

Transaction fees include gas fees and taxes. Gas fees are set by validators to avoid spam on the network. Taxes are set by agreement and can be changed by voting, up to a maximum of 1%.

Luna holders can delegate their Luna to a validator for a reward (~10%/year) without having to become a validator themselves, contributing to the total amount staked by the validator. Validators will receive a commission from the reward and transfer the remaining amount to delegators.

Vaults receive Luna from seigniorage and use it as a fiscal stimulus to support applications in the Terra ecosystem. The exact usage of the treasury funds depends on validator proposals and votes. The idea is to boost economic growth by supporting applications in the economy. 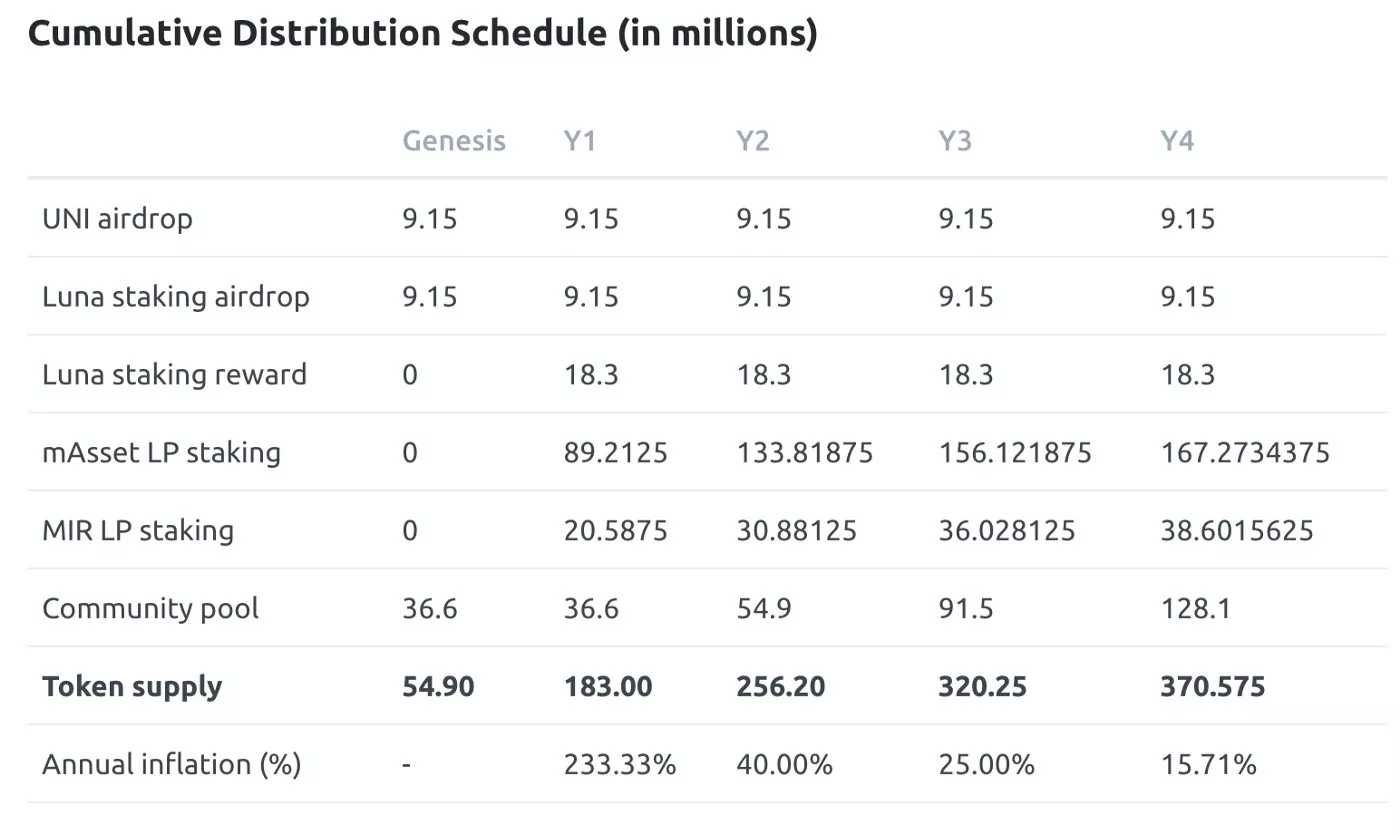 The Mirror protocol aims to bring synthetic assets, known as Mirror Assets (mAssets), into the Terra ecosystem. These replicate real-world stocks, allowing people outside the U.S. to invest in U.S. stocks and profit from price action, even without regular access to U.S. equities. The protocol is built around the use of UST, but it has its own Token MIR, mainly for governance.

mAssets tracks the price of real-world stocks listed on Nasdaq and backed by collateral. Users who want to mint whitelisted mAssets need to support the current asset price plus a certain percentage of over-collateralization.

mAssets can then be held or traded on Terraswap. This continues even outside of stock market trading hours. If the mAsset price is too far from the price of the copied asset, arbitrage is used to incentivize users to pull the price back.

Collateral is paid to a collateralized debt position (CDP), which tracks support and liquidates positions if the asset price rises too high without further support. Support is available in MIR, UST, mAssets, ANC, and LUNA.

Mirror uses a built-in oracle that incentivizes it to report the actual price of an asset, or penalizes non-reporting.

The governance mechanism determines which mAssets can be whitelisted for minting.

Staking is in place to allow participation in governance. Stakers can vote and receive MIR Rewards (APR).

MIR staking is funded by a 1.5% protocol fee. A fee is charged every time you withdraw money from CDP.

This contract collector takes a 1.5% fee in UST and sells it on Terraswap to buy MIR, create demand for MIR, and balance supply with staking rewards.

Staking rewards for liquidity providers are funded by Genesis Supply (pictured below), distributed among multiple parties, and paid out over 4 years. 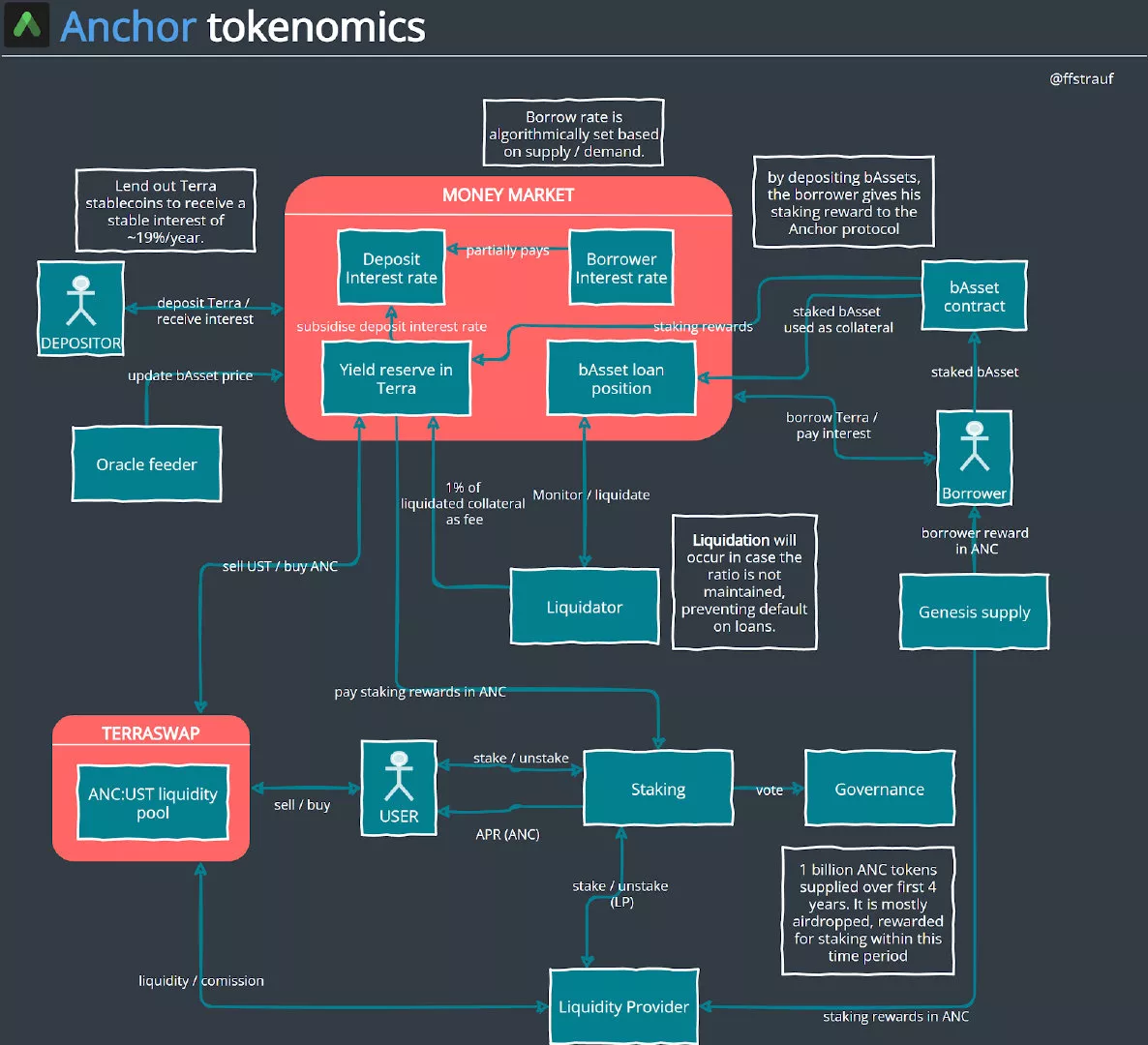 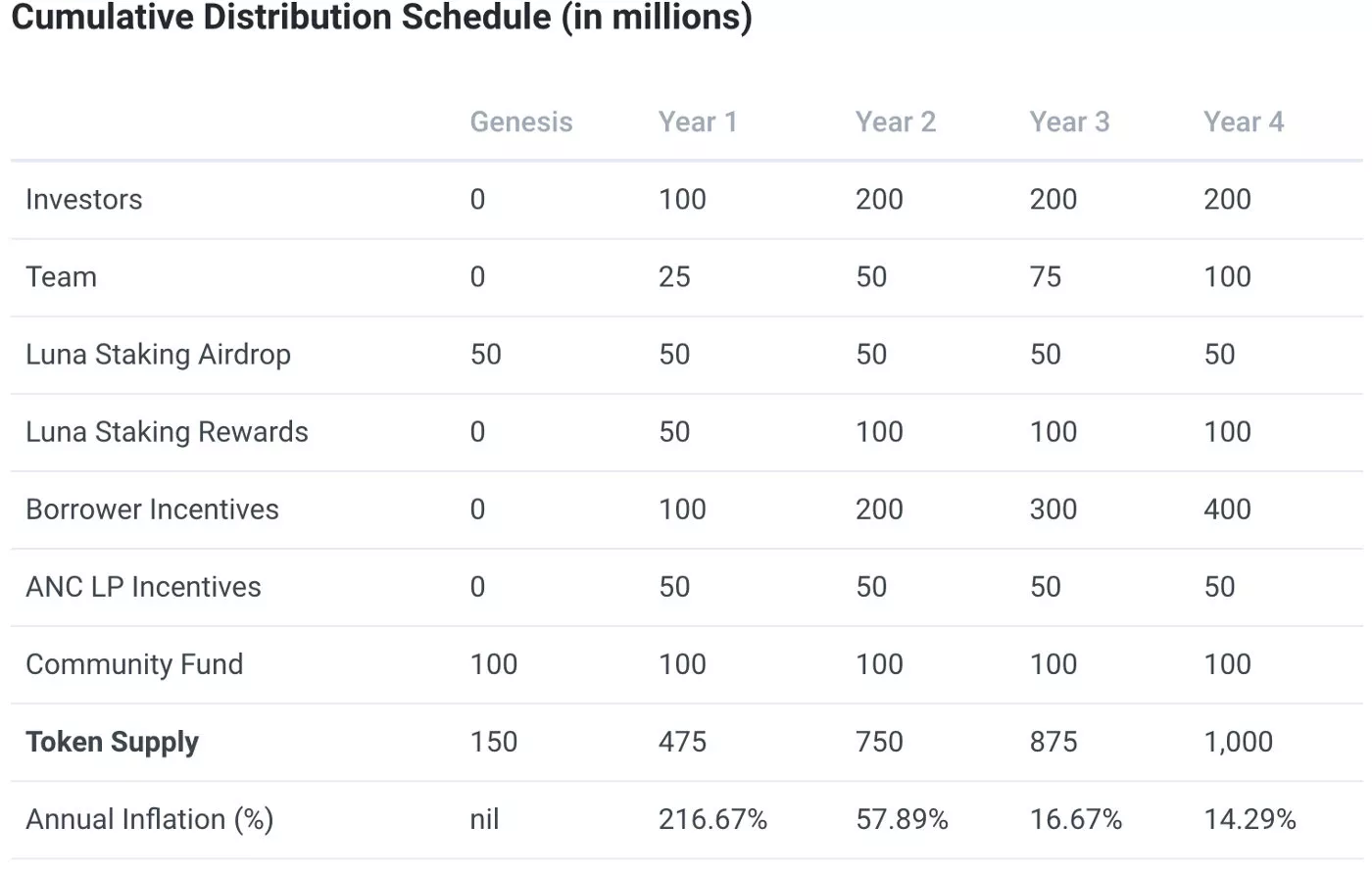 If Mirror were a stock market, Anchor would prefer fixed income, offering a fixed 19% annual return on deposits in UST or other Terra stablecoins. Not many other protocols offer fixed returns, so let's see where those returns come from.

Deposits in Terra stablecoins such as UST or KRT will earn a fixed interest of 19% per annum. Stablecoins enter the pool by currency, and obtain aTerra Token to represent the share of the pool, and claim deposit interest.

The protocol aims to keep deposit rates in the range of around 19%, and does so by subsidizing from yield reserves and incentivizing borrowers to deposit more bond assets (bAssets) when needed.

Borrowers receive Anchor’s governance token, ANC, as a reward for borrowing, usually repaying the loan’s due interest. This is due to the project's genesis supply issuing ANC Tokens to strengthen the ecosystem. At a later stage, this will be provided by the Earnings Reserve if necessary.

Yield Reserve collects excess yield in the form of Terra stablecoins and converts them into ANC Tokens in exchange for Terra stablecoins on Terraswap. This creates demand and balances the supply generated by rewarding ANC Tokens to stakers, liquidity providers, and borrowers. Yield reserves convert and supply the ecosystem only when needed, collect yields when supply is high, and distribute yields to stimulate interest rates when needed.

Borrowers can borrow Terra stablecoins by paying interest and depositing collateral. Collateral is issued in the form of bAssets, and assets are collateral assets in a proof-of-stake protocol. Only Luna is currently supported, but other staking assets are planned.

bAssets are over-collateralized to ensure liquidity. bAssets are staking assets, so they generate staking rewards. This reward is held by the Anchor protocol and paid to the yield reserve or distributed as a staking reward, constituting a large source of revenue for the protocol. Anchor collects staking rewards from all over-collateralized assets. While it will only lend a certain amount of funds to borrowers, it will receive a 200% reward from staking over that amount.

The percentage of overcollateralization is observed by the liquidator, and if the percentage is not maintained by providing more collateral, the position will be partially or fully liquidated. In this case, 1% of the collateral will be paid to the yield reserve.

The Yield Reserve is also responsible for paying staking rewards to ANC stakers. As of this writing, the annual interest rate (APR) is 7.88% and will allow stakers to also participate in protocol governance.

Similar to the Mirror protocol generation, Anchor needs to provide liquidity for its Token ANC on Terraswap. As of now, liquidity providers for the ANC/UST pair will receive around 77% of APR, subsidized by the Genesis supply.

The total genesis supply (see graph below) is 1 billion distributed over the first 4 years. Most of the supply is used to incentivize borrowers.

Oracle price feeds ensure that the price of an asset is kept up to date to track collateral ratios.

Terra, with all its different protocols, is one of the most interesting projects I've come across. The entire ecosystem built around stablecoins is unique and can make stablecoins and ecosystems very popular. Scaling by bridging other chains makes Terra more influential and fits the paradigm of anchoring the balancing mechanism to the practical use of stablecoins.

At the time of this writing, at least a few new Terra projects have popped up:

The Terra ecosystem is built on Cosmos and thus has access to the Inter-Blockchain Communication Module (IBC), which allows easy integration with other blockchains, especially with other chains built on Cosmos such as Binance, Thorchain, Avalanche, etc. . This simple integration, coupled with the fact that a truly decentralized stablecoin is an important part of the infrastructure, makes it possible for Terra to move out of the Terra ecosystem and into other chains.