The market value has exceeded 10 billion US dollars. Do you know all these popular projects on Near? 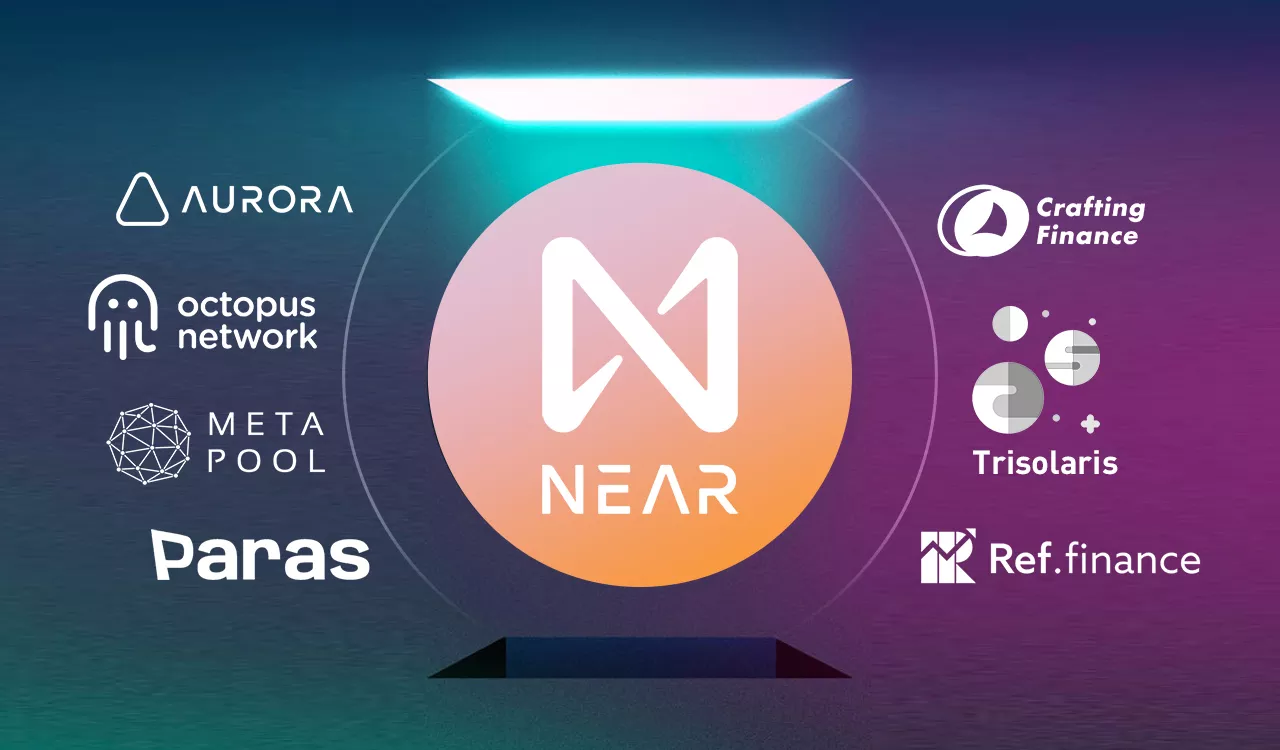 In the first month of 2022, Near, as a representative of emerging public chains, has gained the attention of global blockchain investors. With the continuous development of the Near project, more and more blockchain projects have been migrated and deployed on NEAR. Today, we will share with you some recent popular Near ecological projects.

1. Aurora - EVM of Near ecology, linking Ethereum and Near

Aurora is the Ethereum Virtual Machine created by the NEAR team to provide developers with a turn-key solution to run their applications on an Users with low transaction costs.

Based on the NEAR ecological synthetic asset issuance and trading platform, it announced the completion of the seed round of financing, and more than 30 institutions including Signum, SNZ, LD Capital, CMS Holdings, and Magnus Capital participated in the investment.

Crafting Finance is a new generation synthetic asset protocol based on WASM. By using some assets as collateral to create freely tradable tokenized digital assets, synthetic assets can be generated for various assets and NFTs.

Synthetic assets are one of the most complex product types in the DeFi world. In essence, they use an external decentralized oracle to provide data through a set of over-collateralization models to synthesize and map assets outside the chain within the chain.

Crafting Finance can support a maximum of $1.5 trillion in digital asset collateral, and can also support NFTs such as PUNK/BAYC as collateral to synthesize assets.

Meta Pool, a liquid pledge protocol based on the NEAR ecosystem, announced the completion of its seed round of financing, with participation from institutions such as Dragonfly Capital, A&T Capital, Move Capital, Blockwall, D1 Ventures and SkyVision Capital.

Similar to Lido in the Ethereum ecosystem, Socean in the Solana ecosystem, and Bifrost in the Polkadot ecosystem, Meta Pool is a NEAR-based pledge pool from a business model perspective. Users who need to pledge NEAR on the NEAR network can choose to deposit NEAR into the Meta Pool. The protocol will delegate these NEARs to specific nodes with good performance, and at the same time, according to the number of NEARs, 1:1 will be returned to users representing the shares in the pool. Derivative token stNEAR.

In this way, the liquidity of assets originally locked due to pledge will be liberated in the form of stNEAR, and users can freely transfer, trade, or pledge and reuse these derived stNEAR, thereby improving investment flexibility and potential returns ability.

Paras is a collectibles trading platform built on the NEAR platform. Artists can publish their works or trading cards on it, and investors or collectors can choose to buy these commodities.

Paras will not only add traditional functions such as auctions and bidding, but also focus on the enhanced pack function of cards. Paras wants artists to create collectibles and put them in this booster pack. The logic is similar to the fact that when a user buys a physical card booster pack, they get 5 random cards. In addition, Paras will build a series of trading mechanisms and create booths for artists to display their works, so that they can tell everyone the stories behind their works.

5. Ref finance - a multi-functional DeFi platform based on the Near network

Ref Finance is a multi-functional DeFi platform built on the NEAR protocol, combining several core components such as a decentralized trading platform, loans, and synthetic asset issuance. Its first product is AMM, which is similar to Uniswap and can support more pool types, multi-hop pools (all pools in one smart contract), configurable fees, and more.

The recently launched StableSwap feature - allows users to quickly swap one stablecoin for another with minimal slippage and low transaction fees.

Octopus Network is about to deploy a decentralized protocol, at which time any developer, project party or entrepreneur can quickly and efficiently create their own application chain in NEAR at a low cost. "Octopus provides out-of-the-box security along with interoperability and on-chain governance services for projects looking to create custom blockchains for their own open web applications," explained Octopus Network founder Louis Liu.

The application chain deployed on NEAR through Octopus Network will strongly promote the growth of the NEAR ecosystem, and it is expected that a large number of new applications, encrypted economic models, governance mechanisms and decentralized solutions will be released on NEAR in the future. NEAR will operate the Octopus Lisk in an efficient, scalable, and cost-effective manner, and the Octopus Network is expected to bring a wealth of developer community resources to NEAR.

Based on NEAR's Aurora EVM, Trisolaris is building a one-stop shop for DeFi on NEAR.