Messari : A quick overview of the layout and development status of the DeFi industry

DeFi is still evolving rapidly as L2, multi-chain and modularity begin to reshape the industry.

Original title: "Messari: Finding the Alpha of the DeFi Subtrack"

DEX is the highest revenue sub-track in DeFi, and DEX accounts for half of the revenue of the DeFi track.

Lending protocol TVL is nearly 25% higher than DEX, but has nearly 1/4 less revenue.

Due to the unique capital structure, the TVL of the derivatives track is 4-9 times that of other DeFi tracks.

Liquid staking projects, such as Lido, are TVL’s fastest-growing sector, up more than 50% in the past 90 days, while DEXs and lending exchanges have both declined by more than 14%.

DeFi is the largest and oldest track in the crypto space. Its market cap (excluding stablecoins) is around $70 billion, or 10% of the L1 market. Given the fundamental role of DeFi in the Crypto industry, understanding the various tracks in DeFi and their evolution provides valuable background experience for the Crypto industry.

DeFi can be disassembled as shown below, and they can also be divided into more detail. 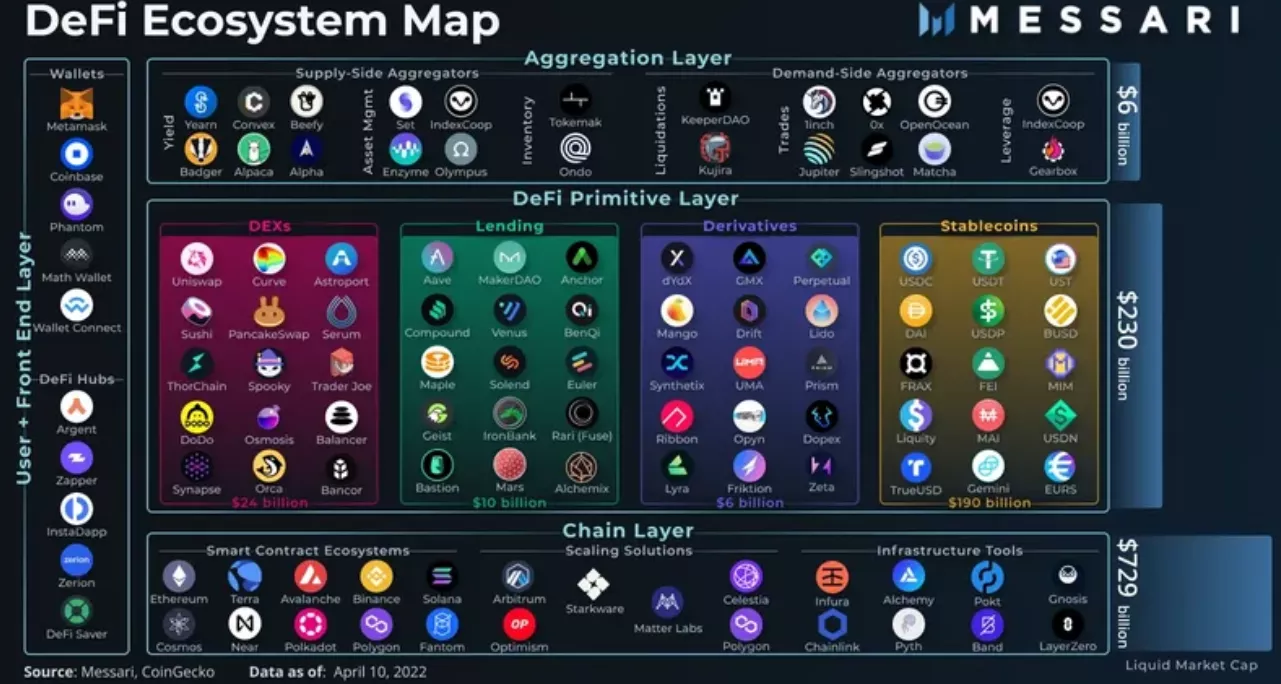 The bottom layer of the DeFi ecosystem is the public chain layer. Smart contracts such as Ethereum, Solana, and Avax provide the infrastructure on which DeFi operates. In addition, there are extensions that increase the speed and efficiency of underlying smart contract transactions. Infrastructure tools complete this layer and provide DeFi applications with API access to the network, data and even liquidity.

The DeFi core layer is in the middle and constitutes the main value of DeFi today. DEXs, lending, derivatives and stablecoins form the core of DeFi. Each class has its own unique revenue model and revenue efficiency. The revenue generated by this layer is the main source of DeFi revenue. Since these sub-tracks form the foundation of DeFi, understanding their revenue models is the first step to mastering the DeFi framework.

3.the upper layer: the aggregation layer

Above the DeFi core layer is the aggregation layer. Aggregators fall into two camps. Supply is the aggregation of funds into a single pool, which is then distributed to other projects. Example: yield aggregator. The demand class differs in that it concentrates user demand for services such as DEX trading or credit. User needs are aggregated or sent to the best DeFi native projects to improve execution efficiency.

The amount of capital locked in a track can be used to measure its importance in the DeFi ecosystem. Based on the amount of locked positions and the level of income generated, it is clear which sub-tracks are of great significance and which sub-tracks are best at converting locked positions into income. Since the derivatives track can be subdivided, it can be divided into: liquid collateral, synthetic assets, perpetual contracts and options. 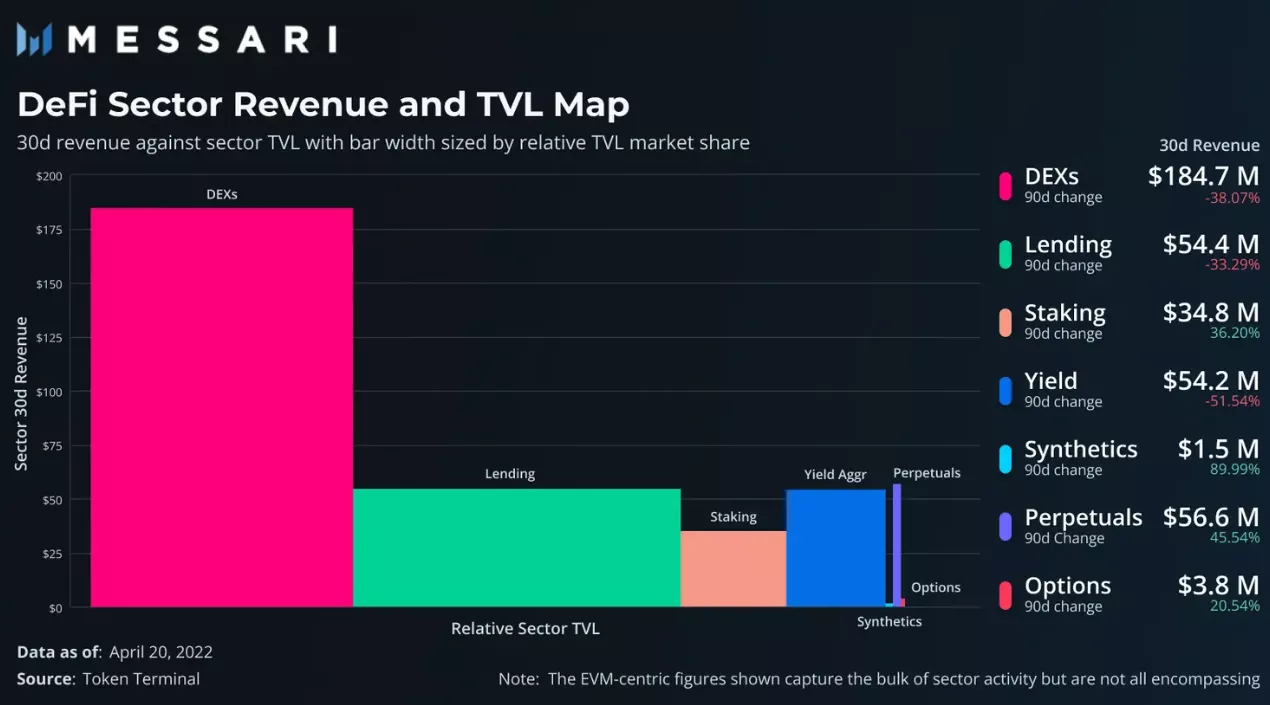 Speculation has been the number one use case for cryptocurrencies right now. As such, DEXs gain enormous value by facilitating the exchange of tokens needed for speculation. DEX transaction fees vary from 3 basis points to 100 basis points of transaction value. Transaction fee revenue from DEXs is DeFi’s largest organic revenue, totaling as much as all other industries combined.

Although DEX's rate of return is relatively high, like other sub-tracks in DeFi, DEX's income fluctuates more. Users are more active (thus speculatively driven) when the price of the coin increases. As a result, revenue goes through various ups and downs with the cryptocurrency market. DEX revenue has been declining for the past 90 days. 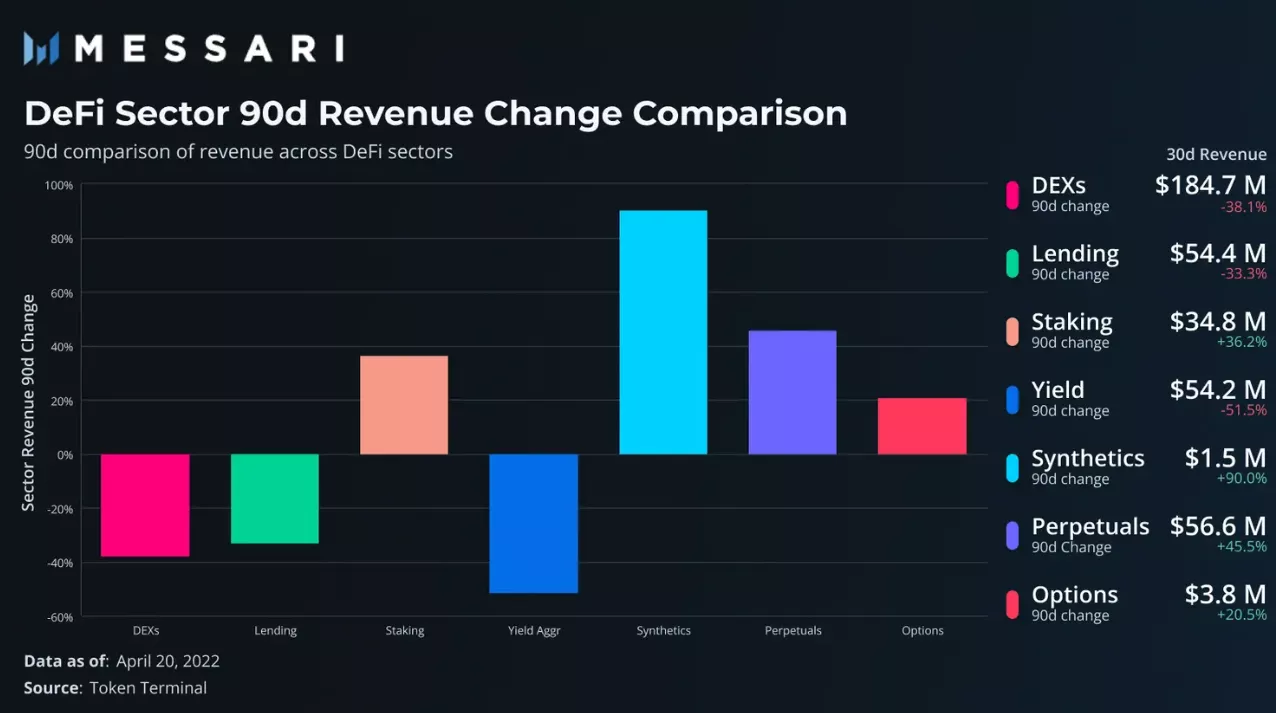 Lending projects lock up nearly half of DeFi deposits (44%). The deposit in the loan agreement is used as the collateral for the loan, that is, the user needs to deposit more assets than the loan. The Lending Protocol is a secure but inefficient overcollateralization system.

If the loan is too risky relative to the collateral, the deposit (collateral) will be liquidated to repay the debt. While this would keep the overall system stable, it would be too capital inefficient. In order to increase revenue like other sub-tracks like DEX, lending projects have to make up for it with more capital.

In the past users accepted the inadequacies of the lending protocol as it was the only source of on-chain leverage. At present, with the popularity of perpetual trading, the situation has changed. Since the beginning of the year, the ratio [perpetual protocol transaction volume / total loan amount issued by lending protocol (rolling 30 days)] has doubled and is now at an all-time high. Additionally, the lending track’s relative deposit share has declined over the past 360 days. 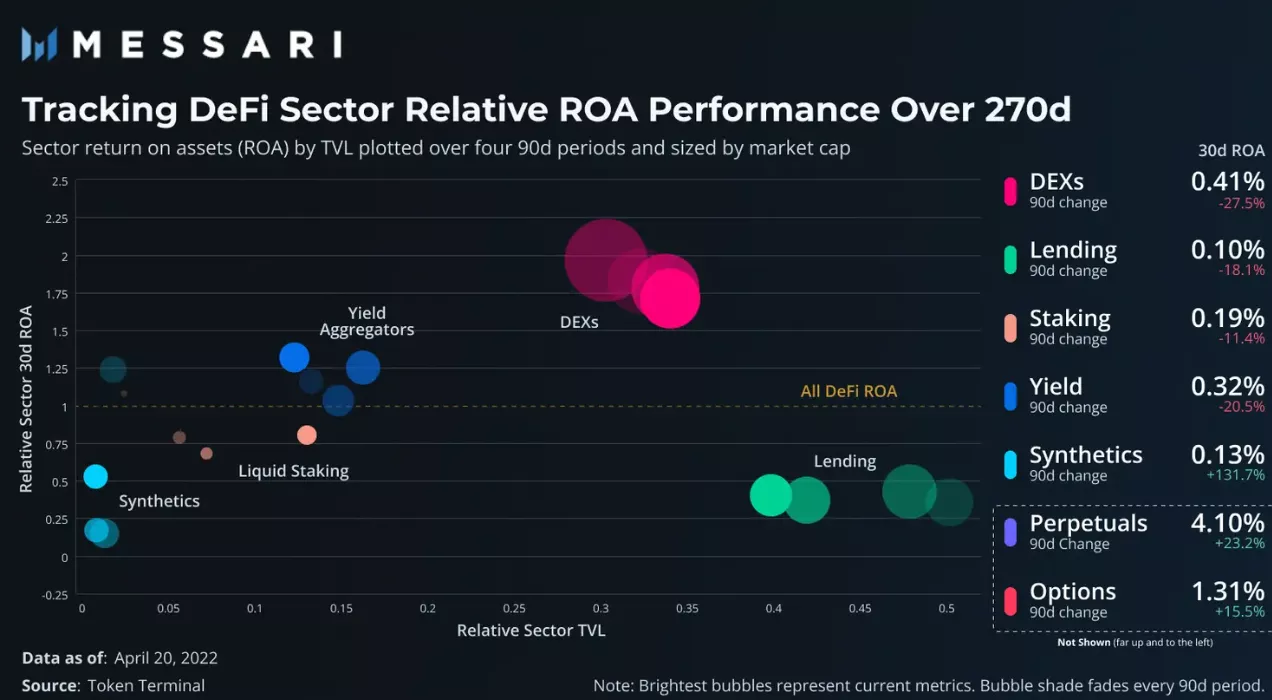 Liquid staking and proof-of-stake (PoS) chains seamlessly integrate. Liquidity staking is not a direct issue of tokens to node validators, which would result in losing positions in DeFi. Users who stake their property can receive both the usual staking rewards and the rewards of derivative tokens.

Lido owns nearly 90% of the market share of the track. It earns revenue by splitting the staking rewards of the original project.

Liquid staking is the fastest growing area of ​​TVL with the impending merger of Ethereum and the meteoric rise of emerging PoS networks like Terra. The track has grown by over 50% in the past 90 days. 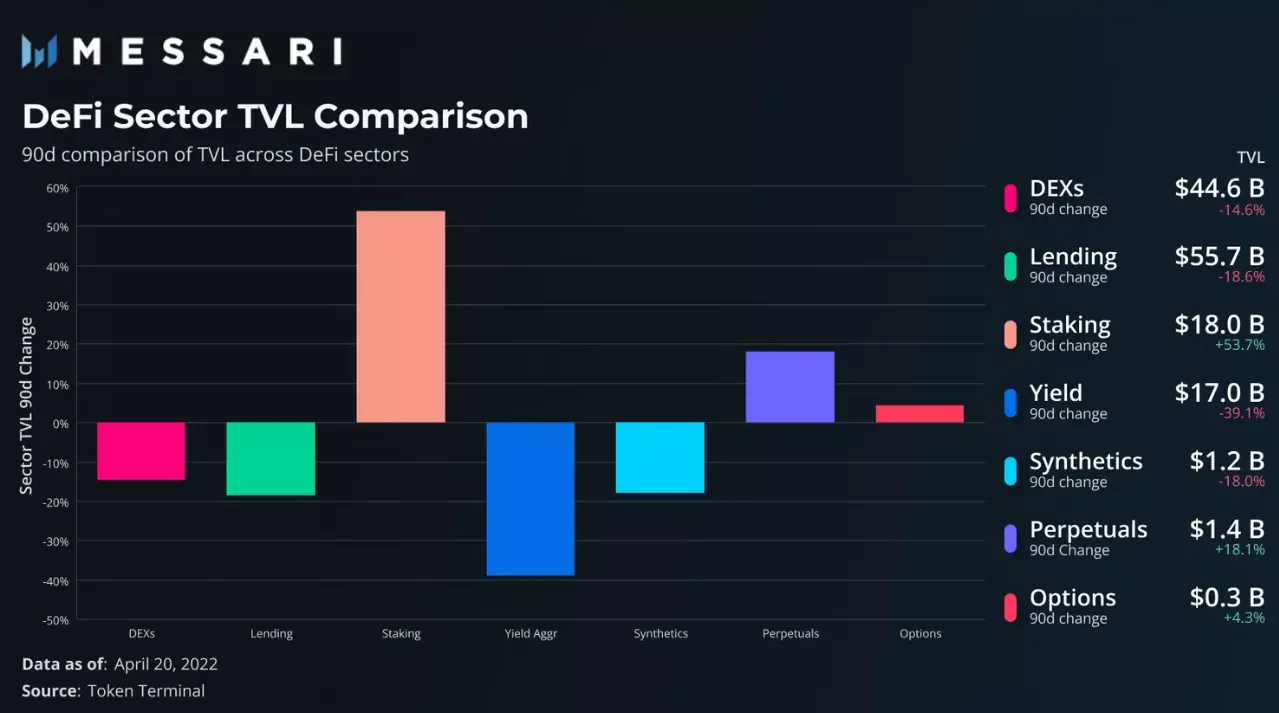 As the name suggests, yield aggregators such as Yearn sit at the aggregation layer of DeFi. A user deposits funds into a project. This protocol then deposits funds into various core-layer tracks, such as DEXs, lending markets, and liquidity staking, and returns ultimately depend on the returns that core-layer projects can provide. However, as core tier projects have token rewards, they are often able to provide higher returns.

In addition to normal revenue, core projects usually reward users in the form of governance tokens. The yield aggregator sells these reward tokens immediately and increases the position in the initial invested token. This is a compounding process because the size of the reward is usually tied to the amount of investment.

Relying on the core layer provides some kinetic energy for the limited growth of the aggregator. The income of the core layer mainly comes from the demand for loans and transactions. Therefore, yield aggregators going long can only benefit from this demand. Investing too much capital will not increase demand at the core layer, and increased investment will not necessarily generate more revenue.

Not all assets are on-chain. It is also impractical to have all on-chain assets in one chain. Users deposit their deposits on the synthetic protocol, which are then minted into corresponding assets. Any asset (whether a stock or its token) can be minted as long as there is a reliable oracle price.

Synthetic protocols can power the deployment of other protocols. For example, Synthetix's support for Kwenta. Kwenta is a perpetual contract protocol deployed on Optimism. Kwenta has access to liquidity from Synthetix, which enables Kwenta to complete trades in some specific assets with low slippage.

Synthetix earns revenue from swaps on its synthetic assets. However, compared to other industries, it is difficult to obtain high income because of the relatively small number of synthetic assets. Both the high collateral ratio and the current low acceptance rate have contributed to the slower penetration of this track. However, penetration is likely to increase in the coming months as other partnership agreements on L2 such as Kwenta attract more and more users. There are some signs that synthetic assets have become the fastest growing track for revenue. 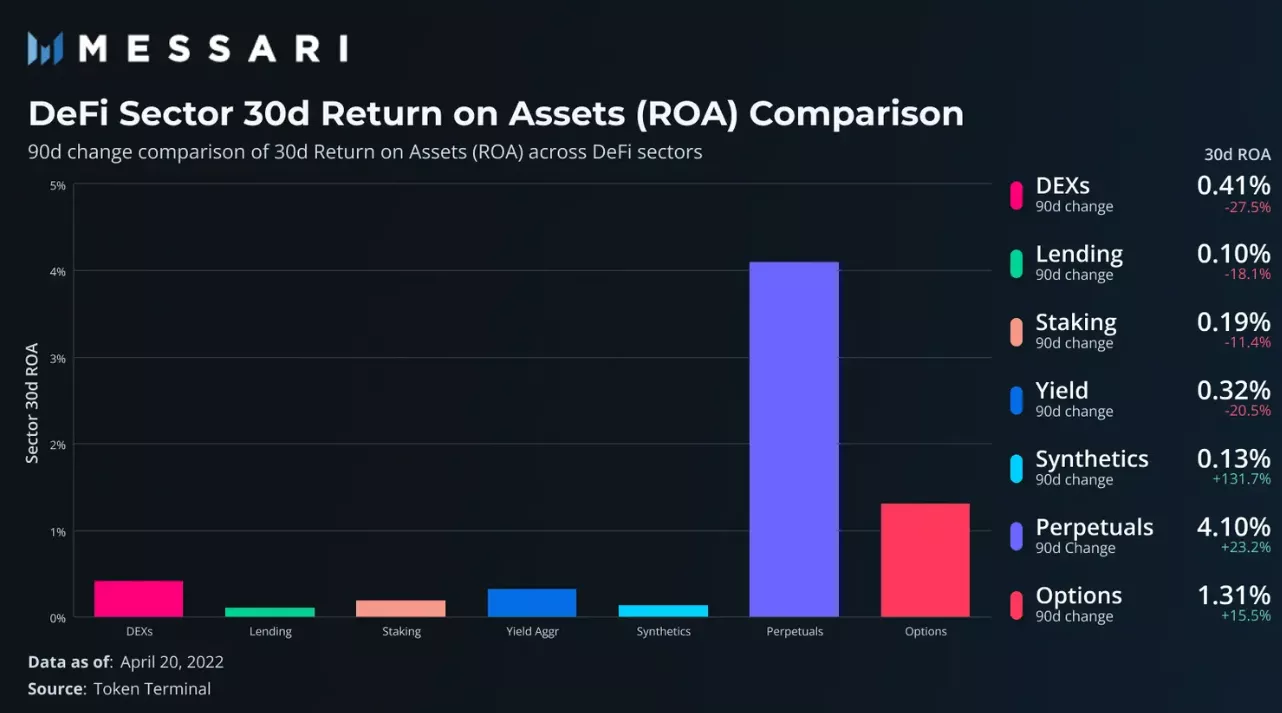 The most traded asset on CEX is a derivative product called a perpetual contract. Popular because it looks and feels like a normal coin (its price is the same). It is not designed to require any trader to actually hold or deliver tokens. After removing the limit on delivery, the exchange can provide traders with long leverage. This asset is wildly popular due to its innate multiplicative effect.

Options got off to a slow start on-chain. While options are Robinhood's most popular product, retail investors prefer other forms of leverage, such as perpetual contracts. But recently there has been a growing interest in decentralized options vaults (DOVs). DOV takes user deposits to underwrite smart contracts, which are then sold to other parties. In exchange, the buyer pays a premium, which is sent back to DOV as revenue.

The proceeds generated will become project revenue. Protocol providers typically take a cut of the proceeds and may also charge a fee for the deposit.

In terms of capital efficiency, options can come in second. Each unit of TVL can yield quadruple returns. While yields look high, also recognize that DOV is the second-lowest revenue-generating track mentioned in this report, and will have to wait for increased demand for options to expand the revenue base.

5. Looking to the future

As L2, multi-chain, and modularity begin to reshape the industry, it is important to understand the industry and current dynamics of DeFi. For now, DEXs may continue to dominate the DeFi space. Not only do they account for nearly half of DeFi revenue, but they also attract more and more TVL.

Looking at each track, the biggest shift that has occurred is that the growing popularity of perpetual agreements is eating into the market share of the lending industry. The ratio of [Perpetual Protocol Transaction Volume / Lending Protocol Total Loan Amount (30-day rolling)] will describe this trend.

The background of the above analysis is on a single and oligopoly-like chain (eg, Ethereum). However, as more chains join in the future, the liquidity of the DeFi industry may bring about new changes. For example, Aave's V3 can provide instant liquidity to cross-chain users.

For details, please refer to the official website of KingData: https://kingdata.com/

TAGSDEX
Be the first to invest in most profitable projects