Do you know? NFTs can already buy land in the US

Written by LeftOfCenter
On November 2, 2021, the decentralized autonomous organization CityDAO tweeted a video announcing ownership of a land in the U.S. state of Wyoming and planting a flag on it.

It's a 40-acre lot south of the Montana border and east of Yellowstone National Park in northwest Wyoming's Shoshone National Forest, just a few miles from the ranch at Kanye West.

Obviously, it is neither a well-connected transportation hub nor rich in natural resources. It has only one well, rocky terrain, and is about 45 minutes from the airport.
As CityDAO has repeatedly emphasized, this is just a "proof-of-concept" experimental project, but it is undeniably significant, especially for the crypto industry, as it is a time to build future cities on the Ethereum blockchain The experiment is the first time that humans own a piece of land in the form of DAO, and realizes the legal possibility of foreigners buying and managing land in the United States.

Recently, the CityDAO land plot plan has made new progress. Through the issuance of Parcel 0 NFT, the application plan representing part of the real land parcel rights is opened to CityDAO community members.

Background of the project

For those unfamiliar with CityDAO, it is necessary to introduce the background of this project.

On July 1, 2021, the Wyoming DAO LLC (DAOllc) Act went into effect. According to the Act: “Unless otherwise provided in the articles of association or operating agreement, the governance of a DAO shall be vested in its members (if governed by members) or smart contracts (if governed by algorithms) (page 11). "In simple terms, Wyoming recognizes the legality of a Decentralized Autonomous Organization (DAO) and allows DAO members to vote on the future growth of the organization, as long as the entity is registered as a corporation in the state.

This means that DAOs and smart contracts are legally recognized in the state. This allowed CityDAO to see an opportunity and organized and practiced this experiment of "Building Future Cities on the Ethereum Blockchain".

CityDAO registered an LLC in Wyoming and purchased a 40-acre parcel of land in northwest Wyoming, then sold the governance rights. By purchasing a Citizenship Certificate NFT, you can become a member of the CityDAO community and obtain an NFT Citizenship Certificate of the corresponding level. This NFT represents the right to access community Discord, voting governance and future community land purchases (3 levels of NFTs have different priorities).

By tokenizing land, rights, and governance rights, CityDAO hopes to use Parcel 0 to conduct a proof-of-concept and explore the acquisition of land and management of the community in the form of a decentralized autonomous organization DAO under the new legal framework formulated by Wyoming. possibility.

This is a DAO-style practice that explores land ownership under a new legal framework, and has attracted the likes of Buterin Butler, Coinbase CEO Brian Armstrong, and others. Buterin introduced CityDAO in his article "CryptoCity" and affirmed that a small-scale trial of an emerging idea at the city or state level is a viable option.

In that article, Buterin wrote:

Cities and states can, at least in theory, generate real dynamism. Because of the huge and very real cultural differences from city to city, it's easier to experiment with a more radical new idea on a city scale than on a national scale because of this scale It is easier for the citizens of the country to reach a consensus. Of course, there are very real and unsolved challenges and opportunities for local governments in sectors such as local public goods, urban planning, transportation, and urban governance. Since cities generally have closely coherent internal economies, in this case, widespread cryptocurrency adoption can occur independently in practice. In addition, experimenting within cities is less risky because it is less likely to lead to poor outcomes, both because cities are regulated by higher-level government agencies, and because city dwellers are more likely to leave than the state If the city is not satisfied, you can choose to leave.

According to the application rules released by the CityDAO community, CityDAO Citizens NFT holders can go to https://parcel-0.citydao.io/ to mint one Parcel 0 NFT for free, Founding Citizens can mint 3, First Citizen NFT holders can mint 10 for only gas fees.

The team has taken a snapshot of Citizen NFT holders at a specific time between May 16th - May 17th, therefore, holders after the snapshot time cannot claim Parcel 0 NFT, want to Investors who start can buy in the secondary market.

Citizen NFT snapshots between May 16th and May 17th

CityDAO registered an LLC in Wyoming and purchased a 40-acre parcel of land in northwest Wyoming, then sold the governance rights. By purchasing a Citizenship Certificate NFT, you can become a member of the CityDAO community and obtain an NFT Citizenship Certificate of the corresponding level. This NFT represents the right to access community Discord, voting governance and future community land purchases (3 levels of NFTs have different priorities).

What is the total supply of Parcel 0 NFT?

If the total amount of Parcel 0 NFT minted is 4,000, then Parcel 0 will be divided into 4,000 parcels of equal area. If the final minted amount cannot be divided equally, then the remaining part will be minted by the CityDAO treasury to make up the divided balance.

Each Parcel 0 NFT is an ERC-721 NFT representing a single plot (plots) with specific geographic coordinates, topography, and area, which can be viewed from the NFT's metadata.

The geographic location of the Parcel 0 virtual parcel will be randomly assigned, and the minting order or NFT ID has no effect on the geographic location of the parcel.
Mint multiple Parcel 0 NFTs in the same transaction, and the parcels will be connected horizontally from left to right with a high probability. Under certain circumstances, it is also possible to allocate on two different lines, for example if the previous plot is the end of the line on the upper line.

What rights does Parcel 0 NFT represent?

In theory, NFTs can represent any interest, depending on the specific terms of the agreement between buyers and sellers. Therefore, it is very important to understand the specific rights of NFTs, whether as a seller or a buyer.

Specific to this project, what needs to be clarified is, what specific rights does Parcel 0 NFT represent? And what are the corresponding permissions of Parcel 0 NFT and CityDAO NFT?

Specifically, Parcel 0 NFT represents a license agreement between the holder of Parcel 0 NFT and Parcel Zero, LLC* (a wholly owned subsidiary of CityDAO, LLC)* which grants the holder the following Land related rights:
· The right to visit and protect the site (subject to the "permitted use", which is set by CityDAO, LLC algorithmic governance);

· Governance (for Parcel 0 treasury and projects within the scope of "permitted use").

It can be said that Parcel 0 NFT clarifies the specific rights of the holder to the Parcel 0 plot at the legal level and grants the holder the actual legal governance right of the Parcel 0 plot. According to the terms of the license agreement, Parcel 0 NFT holders currently only have two license rights (visit and protect) and governance rights. The related rights (such as construction rights) that other users are very concerned about are not involved, at least not yet, but it does not rule out that more rights will be unlocked through CityDAO in the future.

In the future, the CityDAO community can expand or change the "Permitted Use" according to the situation. Parcel 0 NFT holders will have more rights than the current rights, but any development will be subject to legal and financial restrictions. And the governance of CityDAO. In theory, CityDAO could also issue NFTs representing other rights in Parcel 0. 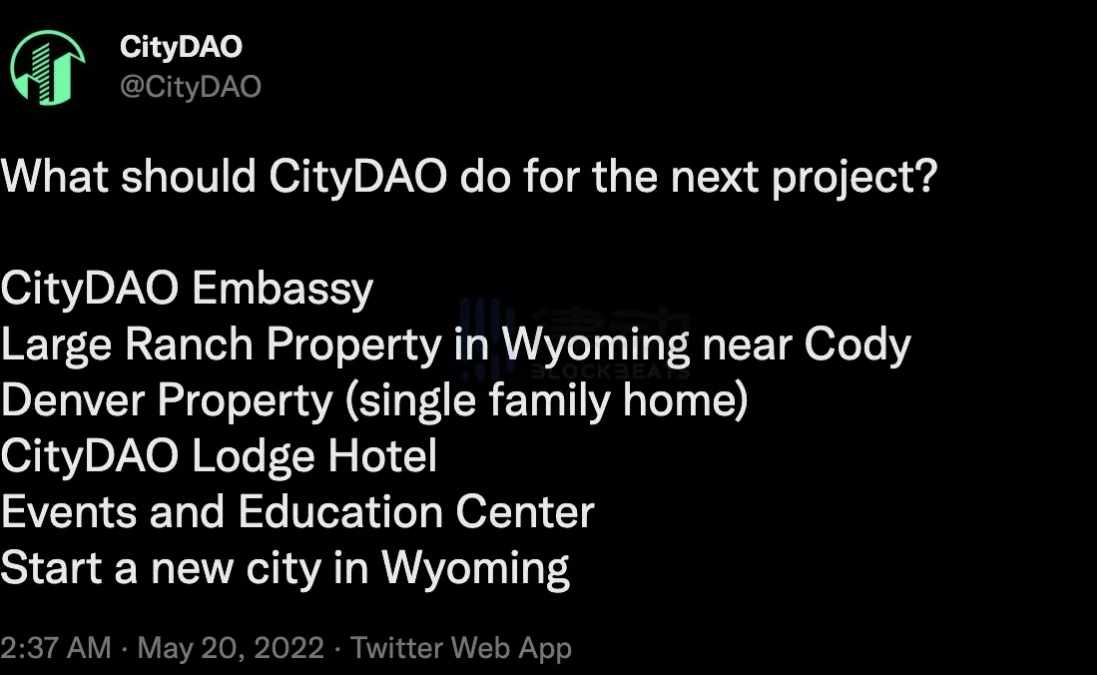 Currently CityDAO is voting for the next project

Undoubtedly, as a proof-of-concept project, CityDAO is still in the early stage of exploration. For this kind of radical exploration, we must have the psychological expectation of "may face many challenges on a realistic level", and clearly understand that "NFT does not It is not equivalent to the real estate certificate, but the fact that it is part of the right to use and govern”. But at least, CityDAO allows us to witness the potential of NFT and reality combined - NFT can not only buy virtual land in the metaverse, but also buy real land across borders. From "impossible" to "progressive" obtaining rights, such small advancements and attempts have begun to affect the real world. As the official tweet released by CityDAO said, "This is just the beginning." This is just the beginning.

【Ultimate Guide】What is NFT and how does NFT work?