In the early morning of October 9, Ethereum Gas suddenly skyrocketed, and the Ethereum browser displayed 200 gwei. Looking for its source, it turns out that various social media and communities are constantly minting, disseminating and discussing the project XEN Crypto. Twelve hours have passed, and the casting heat of XEN Crypto has not diminished. According to ultrasound data, the number of ETH destroyed by XEN Crypto has reached 1092 so far, accounting for 45% of the total destruction of the entire network today. There are currently 140,000 minting addresses participating in XEN.

Why did XEN Crypto explode in the Chinese area overnight? In this article, PANews will sort out XEN's concept, design mechanism, reward acquisition method, and follow-up development preview for you.

According to XEN's white paper, XEN's goal is to become a community-built encrypted asset that realizes the original mission of the blockchain: decentralization, transparency, censorship resistance, peer-to-peer value exchange, and ownership. XEN allows users to enter with the lowest threshold through its unique economical design.

The original intention of the team to design XEN is that encrypted assets are polarized, well-known assets are constantly overbought and then sold; non-famous assets have been ignored by many investors for a long time, and are pre-mined by the founding team and giant whales and then sold. XEN solves these two problems through fair distribution.

XEN aims to empower individuals, without pre-mined coins, without administrator private keys, contracts cannot be tampered with, centralized transactions are not online, 100% transparent and on-chain.

On August 13, 2022, Jack Levin tweeted about the FairCrypto Foundation and XEN Crypto's vision, developed by partners, with team members including computer science, communications, software and product development, marketing and investment. The goal of the FairCrypto Foundation is to realize its vision by educating, organizing and launching blockchain projects. Jack Levin is an open source technology expert and claims to be Google's No. 21 employee (1999-2005), but according to the public information inquired by PANews, Google's No. 21 employee is Marissa Mayer, who served as Yahoo's CEO, but according to multiple sources It is revealed that Jack Levin is indeed an early employee of Google, but his LinkedIn has not yet shown the experience of XEN Crypto. 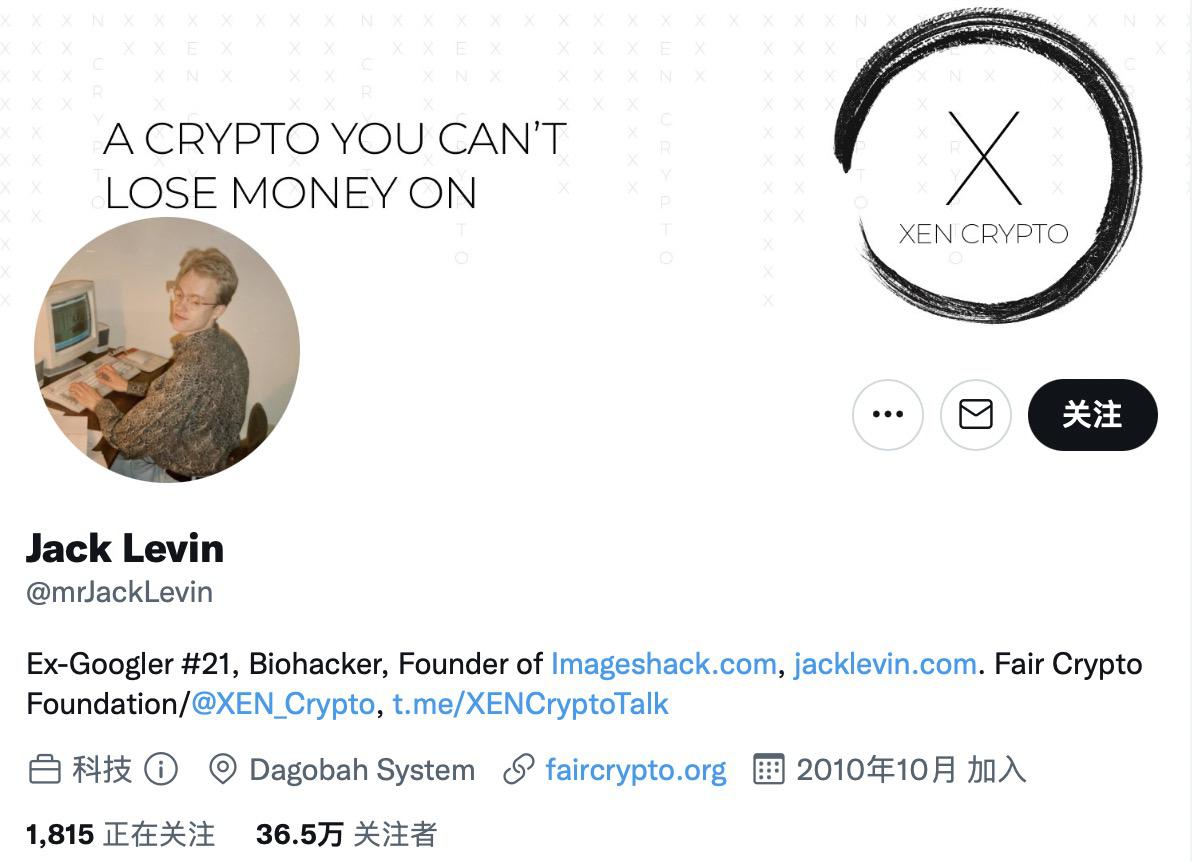 How does XEN come about?

XEN mining participants own the ownership of the mined XEN tokens. As the number of participants increases, the mining difficulty increases and the supply decreases. There is no need to lock or pledge any assets to obtain XEN tokens, just connect the wallet to mint. The variables and calculation formulas that affect the number of castings are as follows: 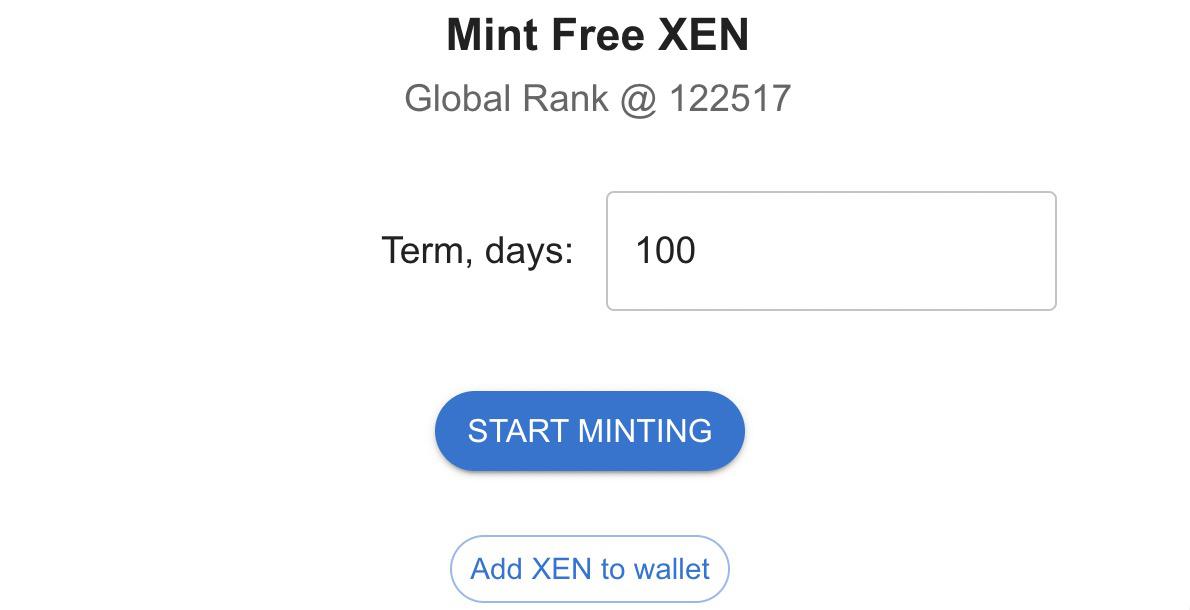 The Global Rank will continue to increase as the number of addresses participating in the minting increases, and the waiting period (Term) means you choose how many days to receive XEN. 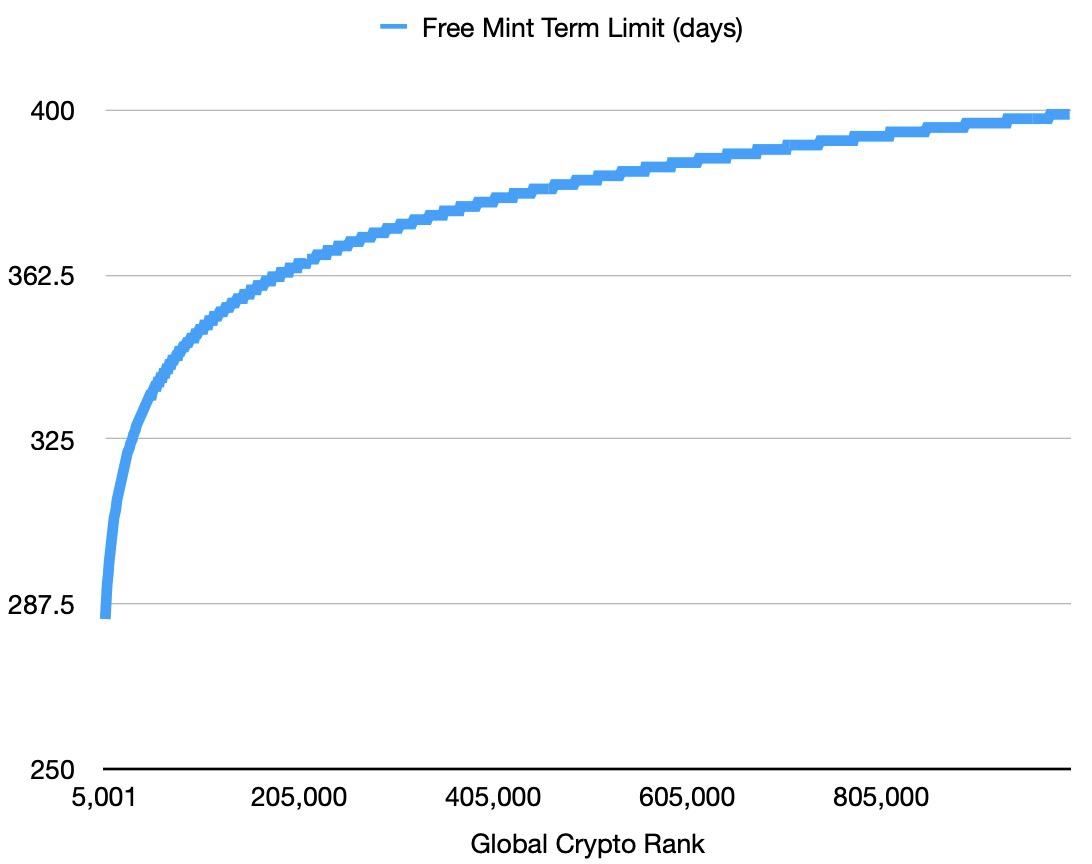 After you click to cast, the XEN smart contract will generate and provide the rank (cRank) you cast at the moment. cRank is a natural number that represents your relative position in the entire XEN ecosystem, that is, how many people have participated in casting before you cast.

The user’s final reward (Ru) is calculated by multiplying the difference between the user’s rank (cRank) and the global rank (Global Rank).

The waiting time (T), time-dependent reward amplifier (AMP), and early participant amplification factor (EAA) were calculated from the chosen waiting time at the time of minting. The detailed formula is as follows:

Note: The Reward Amplifier (AMP) is a time-dependent constant that decreases every day after the start of the genesis minting (the AMP at that time is recorded on the chain when the user mints to claim their rank). The Early Participant Amplifier (EAA) is an additional reward rate for those who are the first to participate in XEN, which is 10% at the time of genesis and then decreases by 0.1% every time the Global Rank increases by 100,000.

The minting quantity at the moment of minting can be calculated. For example, if the current global ranking is 122517, your ranking is 122509, and the period for receiving coins is 100 days, then the mining quantity at the moment you mint is 900,000 XEN. After that, the number of rewards you get will continue to increase as the number of minters increases, and the final reward composition is as follows: 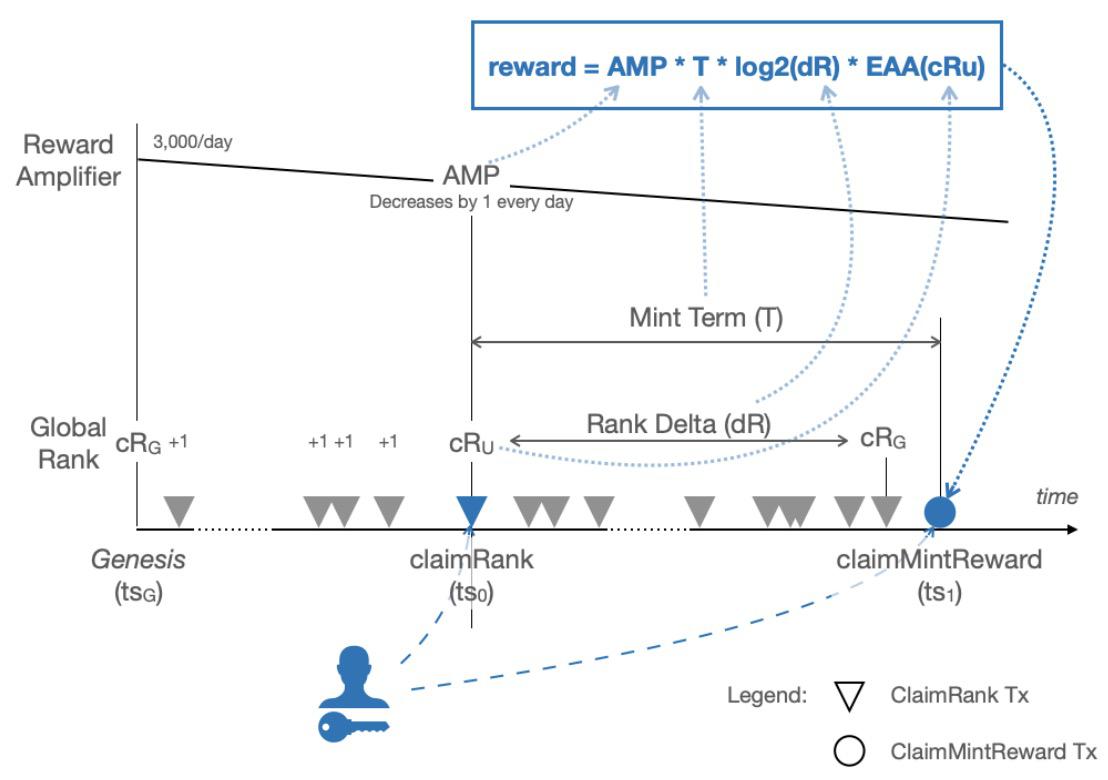 By design mechanism, XEN has no upper limit. However, because the output function adopted is logarithmic, as more and more people join and participate in the casting, the difficulty of producing more XEN will continue to increase. Difficulty here refers to the waiting time according to the formula above. This means that each new participant will either get less and less XEN, or need to significantly extend the waiting time to get XEN to get more XEN. That is to say, the only way to get more XEN from minting in the future is to extend the waiting time for receiving XEN.

Multiple chains other than Ethereum will be launched

According to Jack Levin, founder of XEN Crypto and faircrypto.org, XEN was first launched on Ethereum and will be launched on other networks in a few days, such as Polygon/MATIC, BSC, Avalanche, Optimism, ETHW and many more chains.

It will be bXEN on BSC and pXEN on PulseChain, each chain has a different supply and a different global ranking, and the XEN of each chain will not be merged, not in a 1:1 ratio between chains exchange, because the gas fees required to produce tokens and the security of the chain vary.

XEN will establish a unified liquidity pool (LP), and then set an exchange ratio to trade across different bridges. For example, XEN is sent between Polygon and Ethereum through SushiSwap's Stargate, the user enters the Polygon XEN pool on the Polygon chain, and receives Ethereum XEN on Ethereum according to the set LP ratio.

According to the contract design of XEN, when the waiting period ends, you should claim XEN tokens within 24 hours, otherwise your reward will be punished and gradually reduced. The reason for the gradual reduction is to avoid users who mint with multiple addresses at one point in time, and then sell off causing the price of XEN to drop significantly. The method of gradual reduction is in days, and after 7 days, the amount that can be claimed is reduced to zero.

For example: If you pledge 100,000 XEN in the first 90 days after XEN's creation, you will be able to get 120,000 XEN after 365 days. Its rewards are based on a non-compounding annualized rate of return. The specific calculation formula is as follows: 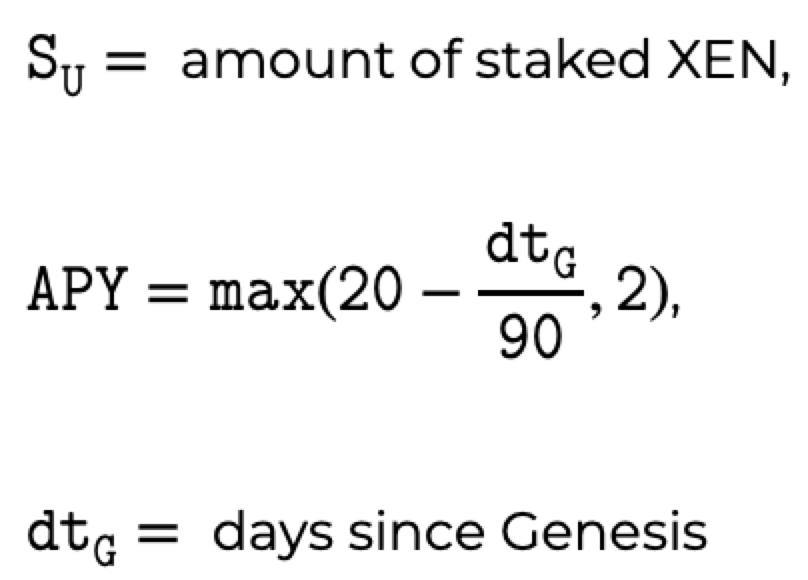 Through the above sorting out, user participation in the XEN system can be divided into the following three processes:

The zero-sum game of the fund-like model, the continuation period is unknown

The design mechanism of XEN, in fact, its casting process implies an invitation and incentive for all members. Because those who have already participated in order to get more rewards need more people to participate in the minting, so that the users who have participated in the minting are motivated to invite new addresses to join. According to the operation process of the chain game in the previous capital disk mode, the operation of this type of mode will eventually have a critical point, and the collapse will start when no one enters.

Its ingenious design is to share the selling pressure of XEN tokens through the penalty of receiving the waiting period and the receiving period, but when the cycle changes and the FOMO mood dissipates and no one takes over, the arbitrage space is lost, and no matter how small the selling pressure is, it can lead to a sharp drop. .

According to the on-chain data created by Dune user @sixdegree, 27.9% of addresses currently participating in minting have a waiting period of 330-360 days, accounting for the highest proportion, followed by 20.7% with a waiting period of 1-30 days, A state of polarization. 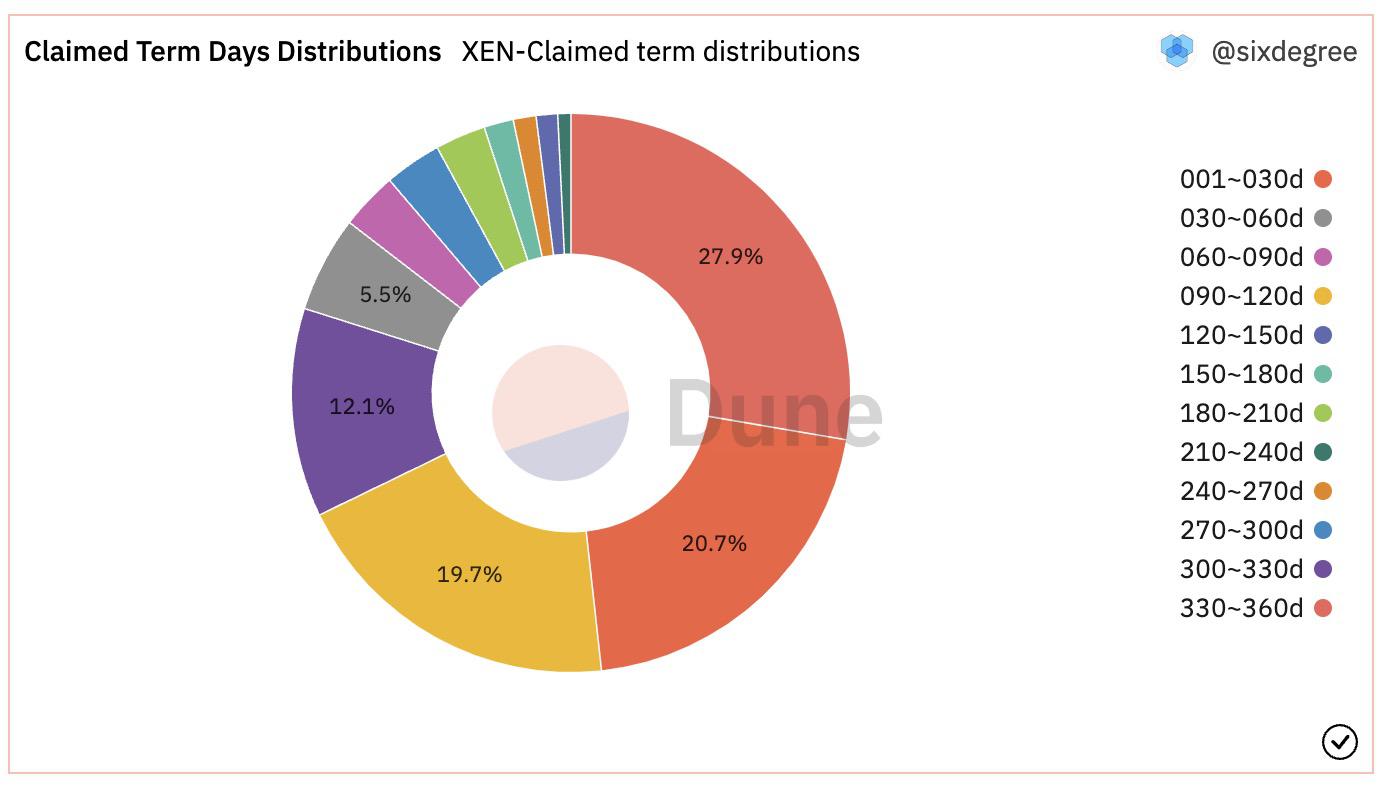 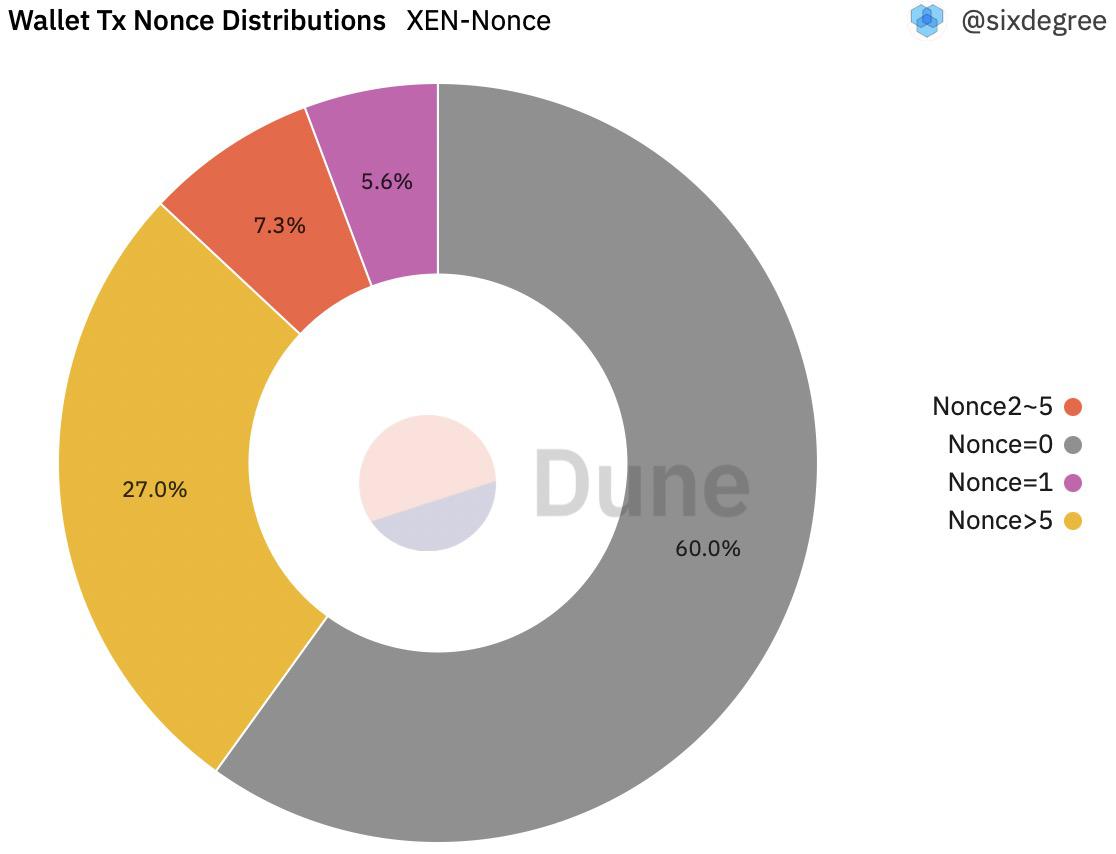 According to the capital disk model, the cycle is too long to share the scale effect, which will hardly cause group FOMO. As Todd, a partner at Nothing Research, said: XEN, the 1.0 version of the standard social experiment, created a token that anyone can come and prostitute. One of the games: Delayed gratification (more than 300 days): The longer you wait, the more you get; Immediate gratification (1-3 days): The shorter the wait, the less you get; a common problem with Social Experiment 1.0 is that Sybil attack is not considered. The wool party can have 1,000,000 numbers, from 1 day to 300 days, and the experiment is unsustainable.

Taking history as a mirror, in 2019, Enumivo (avocado ENU), a project that consumes CPU and RAM resources for mining through transfers, appeared on the EOS chain. At the beginning, it also caused FOMO in the EOS community, but it gradually disappeared after reaching a critical value.

As mentioned above, the minting of XEN tokens leads to an increase in the number of ETH burned, which has the motivation for ETH whales to expand the scale of XEN minting. However, due to the existence of primary and secondary arbitrage, users need to participate with caution.

According to the casting design of XEN, users will try to choose when the gas is relatively low for casting. Due to the mutual game between users, the current Gas is maintained at around 25 gwei.

Over time, as the difficulty increases, fewer XEN tokens can be minted, and even longer waiting periods have little effect. At this time, non-participating community members have a high probability to buy through the secondary market instead of waiting.

But at this time, the price of the secondary market will be subject to the current gas, participation scale, and waiting time. When the price reaches a certain critical value that users are willing to participate in casting, a large number of users in the community will participate in arbitrage, so that casting will be used to sell for profit. This also means that under the premise that the XEN system does not collapse, the pallet of XEN token prices is the current Gas, which also leads to the possibility that the Gas on the Ethereum chain may be in a short-term equilibrium state.

Sandpipers and clams compete for the fisherman's profit. No matter how XEN is interpreted, on-chain fuel tokens such as ETH are the ultimate winners.